Why are Grab and Singtel applying for a Singapore digital banking license together? 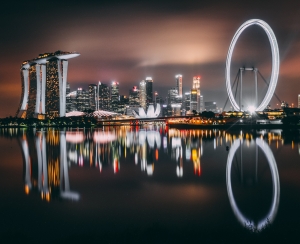 Singapore's ride-hailing unicorn Grab is Southeast Asia's answer to Uber. But as Uber's cash-hemorrhaging business model has come under closer scrutiny, Grab has been racing to rebrand itself: first as a digital bank, then as a "super app" that will offer users in Southeast Asia the same bevy of services as WeChat does in China.

Grab has teamed up with a number of financial-services incumbents in its bid to become a digital bank, but there's a problem with that approach: Incumbents want to co-opt Grab, not let in move in on their core revenue drivers. That's why it makes sense for Grab to apply jointly for a Singapore digital-banking license with telecoms giant Singtel. The two firms have plenty of synergies and no conflicting interests. They applied for the license as a consortium just before the December 31 deadline, with Grab holding a 60% stake and Singtel 40%.

Both companies have a considerable footprint across Asean. Grab is the dominant ride-hailing firm in every major Asean market but Indonesia (although it is certainly competing there) while Singtel is the region's biggest telecoms firm, with a strong presence in Indonesia, the Philippines and Thailand. Given the region's high degree of smartphone penetration, a significant portion of Asean's 655 million people are already both Singtel and Grab customers.

While Singtel's brand is strong, it has lagged as an innovator, The Economist pointed out in a recent commentary. Singtel's e-wallet Dash has not been a big hit. Grab could help out in that are with its GrabPay wallet and suite of digital services.

It is clear that Grab and Singtel have high hopes for their digital banking partnership. They applied for the digital full bank license, which allows holders to serve both retail and corporate customers, offer loans and take deposits.

The Monetary Authority of Singapore (MAS) has set the bar high for digital full bank licenses. It will issue a maximum of two. For the licenses, "MAS will only consider applicants who are anchored in Singapore, controlled by Singaporeans and headquartered in Singapore," the regulator said in a statement on its website.

Further, DFB applicants "must include commitment of funds or concrete fundraising plans to meet the minimum paid-up capital of S$1.5 billion required when the DFB becomes a full functioning DFB," the MAS said, adding that it expects that process to take three to five years from the time the business is launched.

In a statement, Grab and Singtel said that their digital bank will focus on catering to customers who prefer banking online and want more personalized services, as well as small and medium-sized firms which often struggle to access credit.

More in this category: « Do Australian banks need to strengthen AML controls? Beijing is serious about promoting Macau as a financial hub »
back to top
© 2007 - 2021 Kapronasia