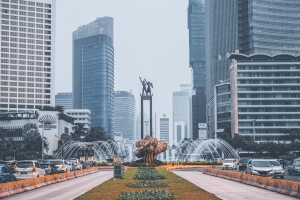 Indonesia just might have the world's hottest P2P lending sector at the moment. We haven't seen this kind of growth in P2P since before a series of huge scams marked the beginning of the end for China's P2P market. From January to May, the Indonesia P2P sector expanded 44% to reach IDR 41 trillion (US$2.92 billion), according to Indonesia's Financial Services Authority (OJK). That healthy growth represents a moderation from the 645% increase in the year to December 2018.

P2P accounts for over 40% of fintech business in Indonesia, according to the Asian Development Bank. Investors, both foreign and domestic, have been pouring cash into the ascendant segment. As Asean's largest economy with a population of roughly 265 million, Indonesia is among the most promising emerging fintech markets in the Asia-Pacific region. It's a bigger market than Vietnam, Myanmar, Malaysia and Thailand combined.

Julo has an interesting strategy. It offers microloans to customers - through both banks and individuals - usually of about US$300, with interest rates of just 3-5% monthly. The company says it can keep the rates low because it can better assets borrowers' creditworthiness than its competitors. It says it has disbursed about $50 million to date.

KoinWorks has a different business model, working primarily as a middleman for SMEs. The company uses artificial intelligence to identify businesses most likely to be able to repay their loans and connects them with lenders. KoinWorks reportedly has 300,000 users, with more than half of those in the millennial demographic.

In addition to its standard P2P business, Investree offers Islamic digital banking services. Investree intends to accelerate development of its Shariah-compliant business unit over the coming year, its CEO Adrian Gunadia told Salaam Gateway in October. From March to October, the Shariah business grew from 2% to 10% of Investree's portfolio. Investree is the only Indonesian fintech that the OJK has granted a lending permit for both conventional and Shariah business.

Keen to avoid China's P2P boom and bust, Indonesia has been steadily increasing regulatory oversight over the nascent sector. Jakarta appears intent on nipping non-compliance in the bud. In October, the OJK announced it had shut down more than 1,000 illegal P2P services.

The OJK reckons that there are currently about 283 online P2P lending firms in Indonesia, but just 127 of them are registered with the regulator.

"The public are advised to use P2P lending services registered at OJK," Sukarela Batumanggar, OJK Deputy Commissioner for Institutes and Digital Finance, said during a recent fintech focus group discussion.