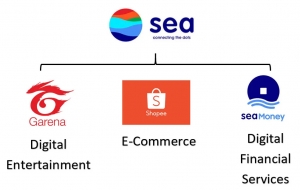 Sea Group just can’t lose when it comes to investor sentiment, even though the company’s losses widened on an annual basis to US$433.7 million in the second quarter from US$393.5 million a year earlier. The day before it reported Q2 earnings, Sea’s share price was about US$291 and as of August 23 it had reached US$315. Over the past year, the stock has risen more than 105% while Sea’s market cap now stands at US$168 billion.

Of its three main divisions, only gaming (Garena) is profitable for Sea, but that is not what investors are excited about. Rather it is Sea’s e-commerce (Shopee) and fintech (SeaMoney) arms that are generating so much interest. Sea is spending heavily to subsidize both of these businesses with the expectation that they will both turn profitable before long, making the company a digital services juggernaut in Southeast Asia.

Shopee’s revenue jumped 160.7% to US$1.2 billion in the second quarter, while adjusted EBITDA surged to US$579.8 million compared to US$313.7 million a year earlier. In Malaysia, the e-commerce platform is on the cusp of profitability as it is in Taiwan.

Payments are just the tip of the iceberg for Sea’s fintech ambitions. The company has won a digital bank license in Singapore, acquired the incumbent lender Bank BKE in Indonesia and applied for a digital banking license in Malaysia as part of a consortium.

While Sea faces fierce competition in all of those markets from rival platform companies, it has the advantage of being able to raise capital cheaply on the NYSE while Grab and GoTo are still figuring out when and how they are going to go public. There is no way either of those firms can outspend Sea at present, or even in the next half year. Provided that Sea grows its fintech user base substantially during that period, it will have an edge over the other super apps.

The question is whether or not Sea will overextend itself. Convinced that its e-commerce success can be replicated in Latin America, the company is spending heavily to grow Shopee in both Brazil and Mexico, the region’s two largest markets. According to research firm AppAnnie, in Brazil Sea is ranked first in the shopping category by downloads and total time spent in app, and ranked second by average monthly active users for Q2 2021. But Shopee is not making money in Brazil yet.

Sea likes to say that there are a lot of similarities between Southeast Asia and Latin America, but the two regions are culturally quite different. It would be wise for Sea to stay focused on Southeast Asia and the integration of its e-commerce and fintech businesses there. Otherwise, it could ultimately lose out to more focused and disciplined competitors.

More in this category: « Why is the Philippines back on the FATF grey list? Identifying the value propositions of Asia’s most successful digital banks »
back to top