What are the prospects for Singapore’s digital banks? 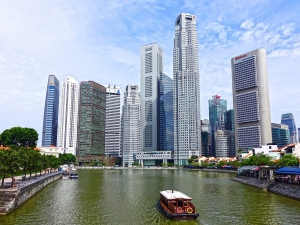 The digital banking proposition in Singapore has always been a bit curious. A central tenet of the case for digital banks in the city-state is that, well, Hong Kong has them, and besides, digital lenders can boost financial inclusion – as long as the definition of financial inclusion is broad. 98% of Singaporeans aged 25 and above have a bank account according to Allianz Global Wealth , so when we talk about financial inclusion in Singapore, we are not talking about the same thing as in Indonesia (34% of adults have a bank account) or the Philippines (29% of adults are banked).

A more persuasive argument exists for Singapore to have digital banks though: They can increase customer choice and pressure incumbent banks to up their game. While Singapore’s largest incumbent lenders are adroit self-promoters, and in some cases digitally agile, they do not always excel in the customer service department.

An annual study by Singapore Management University (SMU) published in March found that customer satisfaction with banks fell 1.7% year-on-year to 74 out of 100 in 2020. Credit cards scored 72.7 points, similar to in 2019.

The study also found that banks ramped up their use of digital channels amid the pandemic-induced lockdown. As a result, many older Singaporeans who would have otherwise done their banking in a physical branch made the transition to online banking in 2020. The percentage of customers 60 or older using digital banking channels surged to 65.5% from just 20.3% in 2019.  Further, 79% of survey respondents said that they increased their use of e-payments (such as Apple Pay, GrabPay and PayLah) in 2020.

The shift online represents a double-edged sword for Singapore’s digital banks. On the one hand, it is good news. More Singaporeans may be willing to try their services. On the other, incumbent banks are going to be much better prepared for the digital upstarts now that they have been forced to accelerate digitization. Highlighting frictionless onboarding and 24-7 online banking services will not be enough to win market share.

In a September 2020 interview with McKinsey, DBS CEO Piyush Gupta said that the bank’s customer volume “using these digital tools” had risen 30%-40% in some areas and as much as 300%-400% in others. While some last-mile gaps remain, “Covid has allowed us to do another two years’ worth of digitization in a short time,” he said.

With the rise of digital assets, DBS plans to launch a full-service digital exchange for institutional and accredited investors. The exchange will provide security token offerings, digital currency exchange (including cryptocurrency trading) and digital custody services.

DBS is also partnering with Temasek and JPMorgan to launch Partior, a blockchain-based platform for payments, trade and foreign exchange settlement. If it can help banks facilitate instant settlements of cross-border financial transactions, Partior has the potential to be a game changer.

Adding to the challenge faced by the digibanks will be the strong momentum Singapore’s incumbent banks are enjoying – provided that it continues. In the first quarter, DBS posted record earnings of US$1.5 billion, up 72% year-on-year. DBS’s fee income hit an all-time high,  with especially strong growth in wealth management and transaction services.

OCBC, Singapore’s second largest lender, posted a net profit of US$1.1 billion in the January to March period, more than double the US$518.6 million recorded during the same period a year earlier. Growth in trading income, fees and commissions and insurance drove OCBC’s strong first quarter performance.

The earnings of UOB, the city-state’s third largest bank, grew at a more modest clip of 18% to US$729.9 million in the January-March period.

And then there were four

The Monetary Authority of Singapore (MAS) has granted digital bank licenses to four recipients: the Grab-Singtel consortium, Sea Group, Ant Group and a consortium led by Chinese real estate developer Greenland Financial Holdings. Greenland’s win raised eyebrows as the firm is relatively unknown in Singapore’s fintech community. The victories of the others were expected. Grab-Singtel and Sea have digital full bank (DFB) licenses valid for both retail and corporate banking while Ant and Greenland have digital wholesale bank (DWB) licenses, which can only be used for non-retail banking.

Pitted directly against Singapore’s top incumbent lenders, none of the digital banks has overwhelming advantages. This is not a coincidence. The MAS seeks evolutionary rather than revolutionary disruption in the banking sector, which may help explain why the UK’s Revolut did not apply for a digital bank license in the city-state.

Nevertheless, the digital banks all have ample market opportunities. For both Grab-Singtel and Sea, those opportunities will spring from the strength of their respective ecosystems. Grab and Sea are two of the largest platform companies in Singapore. They can tailor digital banking products for their customers based on existing customer data and bundle together banking and other digital services. Grab can tap its large ride-hailing and food-delivery businesses, Sea its gaming and e-commerce arms. Grab has the added advantage of collaborating with Singtel, which has 4.3 million customers in Singapore and a 50% share of the mobile market.

Auguring well for Grab-Singtel and Sea is Singapore’s extremely high gross savings rate, which stood at 45.8% in December 2020, according to CEIC Data. Since Singaporeans are dedicated savers, digital banks only need to persuade them to open accounts – and the rest should follow. The likelihood of having lots of accounts with little money in them – a problem for some digibanks in Europe – is not high in Singapore.

Hong Kong’s experience may be instructive. The city’s gross savings rate is high by global standards but much lower than Singapore’s at 24.8%. Still, the Standard Chartered-backed neobank Mox, which launched in September 2020, says that the average on deposit in a Mox account is HK$60,000 (US$7730).

The two winners of DWB licenses will focus on very different market segments than Grab-Singtel and Sea. Ant Group will aim to serve Singapore-based SMEs that do business with China. Despite its regulatory travails at home, Ant retains deep online banking experience and has signaled determination to carry on with its venture in Singapore. Merchants in the city-state that use Alipay are potential customers for Ant’s digibanking services.

Greenland’s target market is less clear, but the consortium has some heavyweight backers that should help ensure it has good business prospects. Greenland’s partners include the blockchain-based supply chain financing platform Linklogis and Beijing Cooperative Equity Investment Fund Management. The Shanghai government has a 46% share of Greenland while Singapore's Government Investment Corporation, Tencent and Standard Chartered are investors in Linklogis.

Since the Singapore market is relatively small, there has been much speculation about how winners of the digital bank licenses will want to use the city-state as a regional hub. While that idea sounds appealing, it is easier said than done. Southeast Asia does not have a common banking market like the European Union, so a license in Singapore does not grant the holder permission to offer banking services elsewhere in the region.

Winning a license in the financial center of Singapore may offer good optics for firms with regional ambitions. But such optics only go far. Having the right partner and being able to offer the right services for the local market in a given country is more important. Sea made that clear when in February it successfully acquired Indonesia’s Bank BKE, which it plans to transform into a digital ban. Indonesian ride-hailing giant Gojek has no Singapore digital bank license, but it still was approved to take a 22% stake in Indonesia’s Bank Jago for US$160 million.

Meanwhile, all four Singaporean digital banks are well capitalized and face strict regulatory constraints in their initial operating period, which should begin in early 2022. It could take them all several years or longer to break even, but they are very unlikely to suddenly implode like the Australian neobank Xinja, or even book massive losses like Revolut, Monzo and N26.

That may make for less dramatic headlines, but it will be better for customers and the overall market, not to mention the banks themselves. In time, Singapore’s digital banks could evolve into significant, if not dominant, players in the city-state’s banking market.

More in this category: « Can NAB sort out its compliance shortcomings? Malaysia’s digital banking race finishes with 29 applicants »
back to top