What are Razer's chances of winning a Singapore digital banking license? 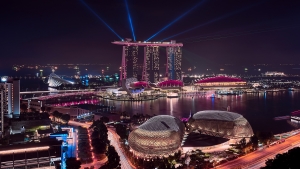 Gaming company Razer isn't the most obvious shoo-in for one of Singapore's digital banking licenses, but has unique advantages it brings to the table. Those include a user base 80 million strong primarily composed of millennials, one of the key target demographics of neobanks. Razer established a fintech unit in 2018 to respond to the need for in-game payment. If it gets the license, Razer wants to expand its digital banking services beyond East Asia to the Middle East, Europe and North America.

Razer is applying for a digital full bank (DFB) license, which allows holders to serve both retail customers and businesses. By comparison, the other type of license available, the digital wholesale bank (DWB) license, permits licensees to serve only non-retail customers.

Razer links its bid for a digital banking license with what it says is a need among its customers for basic online banking services. "In emerging markets like Southeast Asia, the gamers are kids or people who have no credit card. They don't even have a bank account," Lee Li Meng, Razer's chief strategy officer, told Nikkei Asian Review In March.

Yes, that's right: Razer is suggesting, if not outright stating, that online gaming can facilitate financial inclusion. While gaming may not be the most obvious route to joining the formal financial system, neither is ride hailing. Razer's logic is no less robust than Grab's. If a glorified taxi app can also become a digital bank - and that has yet to be decided - than why not an online gaming provider?

Razer has been steadily building up its fintech services over the past few years. In what is probably one of its strongest selling points as a digital bank applicant to Singapore's financial regulator, the Monetary Authority of Singapore (MAS), Razer says its fintech services are profitable. The MAS has been laser focused on preempting a flood of applications by firms with no realistic path to profitability.

Razer has applied for the digital banking license through a consortium which includes Sheng Siong Holdings, technology firm LinkSure Global, automotive marketplace Carro, the insurance services company FWD, and the Singapore-based VC firm Insignia Ventures Partners. Razer Fintech will hold up to a 60% majority stake in the bank, which will be called Razer Youth Bank.

More in this category: « Hong Kong's future as a financial center at a crossroads U.S. lawmakers aim to restrict Huawei's access to U.S. banking system »
back to top