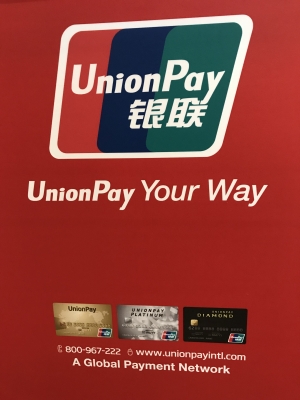 China's UnionPay is stepping up European expansion in a bid to capture business from Chinese outbound tourism and corporate travel. The Chinese payments giant has established a partnership with Barclay's, which processes almost half of the UK's credit and debit card transactions, that will allow 110,000 UK merchants to accept UnionPay beginning from the summer of 2019.

UnionPay and Barclay's are banking on a steady uptick in Chinese visitors to the UK. According to Visit Britain, bookings have risen 31% year-on-year in the January to June period. They tend to spend big too, averaging £2,059 each per visit, thrice the overall market average.

"The UK remains a strategically important and growing market for UnionPay and, with Chinese visitors set to increase, today’s partnership will enable them to more easily and conveniently shop at a much greater number of British merchants," said Wei Zhihong, UnionPay International’s Market Director and Head of its European Branch, in a statement.

The tie up with Barclays follows UnionPay and British payments company Moorwand's January launch of the multicurrency card, UPayCard, to the UK market. Thanks to its partnership with Moorwand, UnionPay does not need to apply for licenses to operate in the UK.

"We are looking forward to building a long successful partnership with UnionPay, and playing a major role in helping to grow their presence even further in Europe," Moorwand CEO Robert Courtneidge said in a statement.

In April, UnionPay announced it would deepen its partnership with Italy's UniCredit in a deal that will facilitate the Italian bank launching UnionPay branded cards in Italy. Using UniCredit's subsidiary network, UnionPay plans to enter central Europe including the Czech Republic, Bulgaria and the Balkans.

Wei told in September that UnionPay sought to compete with Visa and Mastercard in both the UK and continental Europe. To be sure, the Chinese payments giant is likely to attract more business from Chinese travelers than the U.S. card giants. But it's hard to see local consumers in those markets ditching their Visas and Mastercards in favor of UnionPay cards. The U.S. credit card companies have long established rewards programs for cardholders that provide attractive perks like airline miles and discounted or even free hotel accommodation. Those programs are popular with both the consumer and corporate markets.

UnionPay, which the Chinese government protected from competition for well over a decade, didn't have to devise those types of incentives for customers because their business was virtually guaranteed. Even today, with the official monopoly dismantled, if a Chinese person wants a bank card for domestic RMB transactions, it still has to be a UnionPay. China's protected market conditions have served UnionPay well: In 2015, the Chinese payments giant overtook Visa to become the world’s preeminent issuer of bank cards in terms of money transacted. UnionPay accounted for 37% of the $US21.6 trillion spent with bank cards that year, according to Retail Banking Research.

Unfortunately, for UnionPay, Chinese consumers increasingly prefer mobile payments. Indeed, unlike the Western markets, China never really warmed to plastic. UnionPay had only been around for a decade or so when the smartphone revolution began. Analysts say that UnionPay today controls just 17% of China's third-party payments sector, compared to WeChat Pay's 27% and Alipay's 39%.

We expect that UnionPay will ultimately compete as much - if not more - with big Chinese tech firms in Europe as Mastercard and Visa. Both Alipay and WeChat are rapidly foraying into Europe to tap Chinese traveler business. Notably, in March, Barclaycard and Alipay inked a deal that will allow merchants to accept in-store Alipay payments without replacing their existing point-of-sale (POS) system. Alipay users will be able to search for retail outlets near their location to find out business hours, information about sales and directions.

More in this category: « Fintech boosts financial inclusion in Indonesia Fintechs could give Vietnam's banks a run for their money »
back to top