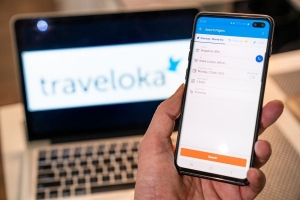 Fintech is the magic glue that holds startup ecosystems together in Asia. One after another, the region's biggest platform companies have pivoted to fintech, and then declared themselves super apps, usually in that order. Indonesia's Traveloka is expanding its fintech offerings from Indonesia to Thailand and Vietnam as it eyes going public in the U.S. this year through a blank-check company.

Traveloka belongs to the high-flying, cash-burning club of Southeast Asian platform companies that also includes Grab and Gojek. Like the two ride-hailing giants, which now harbor big digital banking ambitions, Traveloka has been around roughly a decade and never turned a profit. As transport providers, Grab and Gojek pivoted to delivery service after the pandemic hit ride hailing.

Traveloka had a pivot of its own: It made the best of a bad situation and focused on domestic tourism, which has done relatively well in countries like Vietnam and Thailand which have controlled covid well. Still, by October 2020, Traveloka had refunded US$100 million to customers who canceled their trips. The company says its travel business has since returned to profitability, but that claim can probably be taken with a grain of salt. Tech startups have many ways to measure profitability besides net income.

In the long run, Traveloka reckons international travel demand will come roaring back, and that bet is likely on the money. Yet Traveloka and its backers do not want to wait until 2024 or later for the company to go public. The alternative is to expand Traveloka's fintech business and position the firm as a hybrid digital travel-financial services provider. That should increase its attractiveness to investors in public markets. There is no real competitor in that space yet, save perhaps AirAsia.

Traveloka already offers a suite of digital financial services in Indonesia, with its buy now, pay later services being especially popular. It launched BNPL to allow customers with limited travel budgets to book trips farther in advance. Previously, many of them had waited until their paydays to book travel. A similar strategy could likely be used in Thailand and Vietnam.

At the same time, Traveloka might jump headfirst into the digital banking game in its home market. Caesar Indra, the company's president, told Reuters in February in response to a question about whether Traveloka may buy a bank Indonesia that "all options were on the table."

Being able to bundle travel and digital banking services would give Traveloka a unique selling point in an ultra-competitive market where Grab, Gojek and Sea are already fiercely vying to gain an early-mover's advantage.

More in this category: « P2P lending's future in South Korea looks shaky Line's super app prospects get a boost from merger with Z Holdings »
back to top
© 2007 - 2021 Kapronasia