In an interim report released last month Australia's Banking Royal Commission has highlighted the misconduct, greed, and even criminality involved in the Australian financial services industry. Set up in December 2017, the commission has worked through over 700,000 documents to investigate the dealings of some of Australia’s largest financial companies. The commission has heard from victims and cross-examined some of the key figures in the industry. The results are damning and are likely to spark much greater support for tougher regulation on the banks in the future. However, a battered, bruised, and riskless financial system is no good to anyone and may end up causing further disruption to the economy. It’s important that the government finds the right balance.

What were the findings?

The commission has found that many banks and insurance companies created a system known as “vertical integration” where they would sell financial advice to customers. Unsurprisingly, the advice would be to buy certain products that the bank offered. This would occur even when customers didn’t need those products, in fact the commission found that in 75% of the cases they investigated the advice received was not in the customers best interest.

Huge sums of remediation have also been uncovered. Since 2010 this amounts to $250 million paid to over 540,000 customers. This is linked to fraudulent documentation, processing or administration errors, and breaches of responsible lending conditions.

The commission has also heard some devasting stories from individual victims. One such was the case of Mr Dillon. The National Australia Bank (NAB) was found to have misled Mr Dillion regarding the sale of his family farm, indicating that all the proceeds of the sale would be required to go reduce the facilities on Mr Dillion’s business. At no point did the bank reveal that it did not in fact have security over Mr Dillon property and that he had no obligation to release the funds from the sale to the bank. The result has left Mr Dillon struggling financially, with a much less profitable business and no home ownership, an entirely avoidable situation.

The importance of financial services in Australia 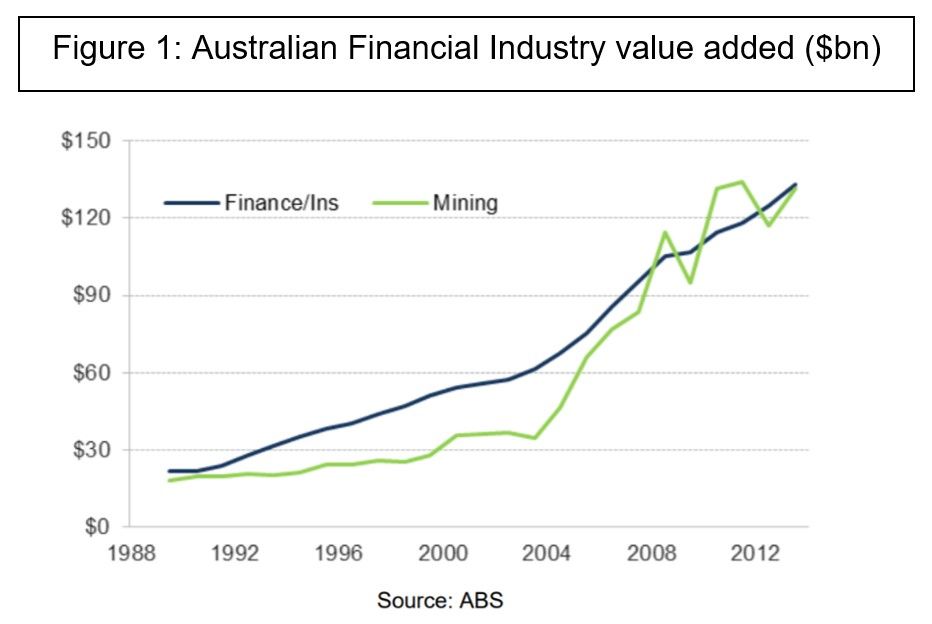 The commission has clearly revealed the ugly side of some of the financial industries dealings and highlighted a clear need for change. However, the healthiness of the industry is crucial for the Australian economy. It’s the biggest contributor to GDP by sector at 9.3%, more than agricultural and manufacturing combined. The value added has been growing strongly since the late 1980s and competes for dominance with the mining industry. 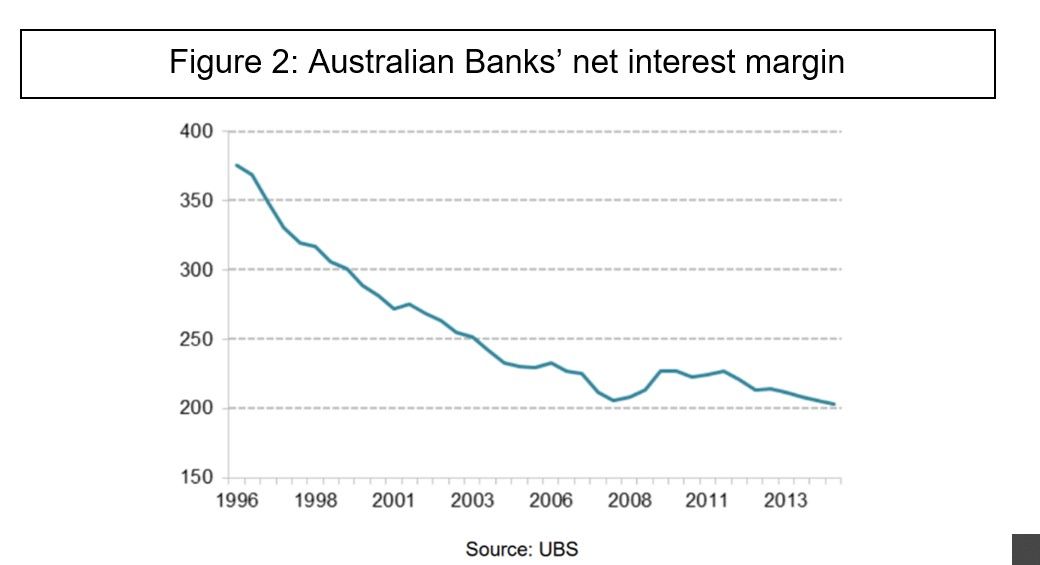 Furthermore, figure 2 shows the Net Interest Margin (NIM) of Australian banks from the late 90s onwards. NIM is a measure of industry competitiveness, measuring the difference between the average cost on banks loans and the cost for banks to finance those loans. The falling margin over the last decade highlights the industry’s competitiveness. Yet, banks have still been maintaining their profits indicating solid performance.

Also, no Australian bank accepted government bailout money or shut its doors during the financial crisis ten years ago. The rate of Non-Performing Loans (NPLs) sits at around 1.1%, lower than the Eurozone average and the United States. A clear indication of the resilience and strength of the industry.

Perhaps, in some cases, the success and stability of these banks has been on the back of unscrupulous dealings with customers. However, it is undeniable that the industry is vitally important, providing excellent opportunities for growth in the economy.

Will the commission do more harm than good?

Of course, increased scrutiny and regulation of financial dealings is necessary to ensure the industry adheres to best standards. And the findings of the commission so far have clearly uncovered reprehensible behaviour. However, there is a serious worry that the final report may go too far and severely disrupt growth.

For example, UBS has found that cracking down on lending could result in a house price collapse, estimating a 10% contraction. Compound this with a slowing economy and the effect could be even greater reaching 30%. Moreover, banks are having to set aside funds to deal with potential law suits and fines and the costs associated with adjusting their services to comply with new regulation. In the last year alone there has been a 48% increase in the number of risk and compliance job postings – a sign that banks are getting ready for a much tougher regulatory environment.

All of this could have as serious negative impact on the real economy as banks reduce their lending. In fact, the Reserve Bank in Australia has warned that increasing global tensions around trade, the slow-down in the Chinese economy, and the fallout from the banking commission report could result in much slower growth rate.

It is therefore important that commission remains level headed. Nobody likes greedy bankers but the services they perform are crucial for continued economic growth and stability, something all Australians have come to want and expect from their economy.

Positives for the medium term

Whilst increased scrutiny and regulation of the financial industry may harm the short-term profits of banks and reduce growth, especially if they occur alongside an external shock from the global economy, there is reason to be cheerful looking forward. Tighter regulation would sure up any adverse risk taking, reducing the risk of financial crisis. It would also force banks to look at their own internal structures, potentially resulting in more innovation and better services.

The financial services industry plays a vital role in ensuring the stability and success of the Australian economy. It’s the country’s biggest contributor to GDP and one of the largest employers. Nonetheless, as the commission as uncovered, in many cases the checks and balances on greed have clearly failed. This is not acceptable. A well-regulated, accountable and secure financial system is in the interest of all Australians. But the commission must be very careful to get the balance right. This is especially important given the precarious position of the global economy.

More in this category: « The Samoyed manages your credit card in China Is Vietnam the next hotbed for fintech? »
back to top