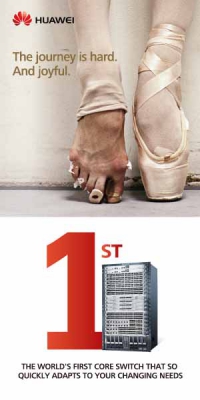 One of the latest ads from Huawei, the large Chinese manufacturer of networking equipment, is a rather disturbing wrapped up ballerina's foot. While the idea is good, the advertisement shows that there's still a gap in understanding between tech and the consumer. 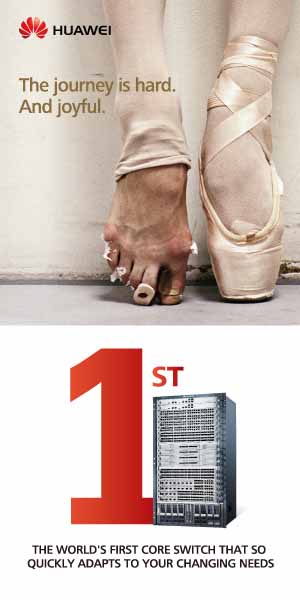 The ad is accompanied by the text 'The journey is hard. And joyful.' The imagery is stark, replete with a couple of bloody toenails and a pretty rough looking foot. From speaking to a few friends involved in ballet, the image is accurate. But it's not a particularly good choice for marketing.

Potentially...at a stretch, this ad might work in China. Although I'm far from being the best expert on China, hard work, especially as it relates to the arts, is appreciated here, so people could relate to that.

The tagline at the bottom is also fairly meaningless. 'Quickly adapts' is a vague and subjective description. What does adapt mean? How fast is quickly? This statement adds nothing to the overall message.

Samsung has also been notoriously bad in some of their latest advertising for their products including one in 2013. Three people are sitting on a ski-lift and in the most uncomfortable 2 minutes in youtube history, the guy with the Samsung smartwatch literally snowboards off into the sunset with the girl. The guy without the Samsung smartwatch, you guessed it, spends the night alone. If you haven't watched, definitely take a look.

How does this happen? Companies like Apple are masterful at business to consumer marketing, how can other large companies like Huawei and Samsung get it so wrong?

There's no simple answer to this. Before Apple, the tech industry was pretty bad at marketing. Technical excellence and relative monopolies were enough to guarantee marketshare. You didn't need a slick marketing campaign to be successful. That's changed. Apple knew that the perception of the device was more important than the device itself.

We've seen how Saumsung's marketshare has dropped rapidly over the past few quarters. Samsung's Galaxy series of phones were some of the most technically advanced on the market, but it lacks the cachet value of an iPhone. People are willing to trade perceived value for actual value. Even the iPhone 5C, which was not the greatest tech that Apple has put on the market, it gained a following, largely driven by the perceived coolness of Apple products.

So why are we talking about it?

Because the financial industry consumer is changing, and changing rapidly. The shifting profile of users and an increasingly large number of choices of service providers mean that financial institutions need to up their game. A typical bank's advertisement historically has pandered to 'will be with you all the time' or 'wealth for generations.'

Millennials care less and less about this. They want simple and straightforward messaging and smooth technology. We talked before about the very basic, but very appealing marketing behind Webank, the private bank from Tencent. Tencent's understanding of customer behaviour and preferences will make Webank an immense success.

Technology firms need to get better at this too. Right after I saw the Huawei ad for the first time, I can't help but feel my attitude towards Huawei products dropped, even though the advertisement has no bearing on the quality of the actual product.

Unfortunately, marketing in many fintech companies is put to the side as there is the belief that a good product will drive sales. As Huawei might show and Samsung is showing, that's not always the case.

More in this category: « Your personal credit score may come from Alibaba in the future Emerging Asia E-Commerce & Supply Chain Conference »
back to top