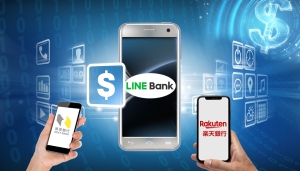 Digital banks tend to lose money in their early years of operation. It is usually not a question of if, but how much. In the case of Taiwan’s banks, the losses are sufficient to potentially require an increase in capitalization. Line Bank lost almost NT$2.3 billion (US$78.7 million) in about one year of operation while Rakuten Bank lost NT$705 million (US$24.1 million).

Line Bank attributes its losses to “aggressive marketing” tactics (we would call them “heavy subsidies”) to attract customers, which increased operating costs, and says it anticipated being in the red. As of the end of January, the Taiwanese digital lender had 732,600 depositors with a total of NT$28.8 billion in deposits. That's an average of NT$39,312 (US$1,345) per account.

While the account numbers are impressive, Line Bank needs to work on increasing the average balance. That would require Line to better leverage its large digital services ecosystem in Taiwan, which includes messaging, e-commerce and entertainment as well as fintech.

One problem for Line somewhat unique to Taiwan is that the retail banking market is unusually saturated, with more than 35 lenders for a population of just 23.5 million. Not only are there too many retail banks, there is also a business culture that requires employees to open an account with their employer’s bank whenever they change jobs. This is prevalent enough that the typical Taiwanese office worker has multiple retail bank accounts, one for each employer they have worked with. For Line to make deep inroads as a primary retail account provider, it would need to persuade employers in Taiwan to choose it instead of an incumbent lender and pay employee salaries into Line Bank accounts.

In theory, Rakuten Bank faces the same challenge, but it appears to be casting a narrower net than Line Bank, and aiming at a more premium customer demographic interested in cross-border e-commerce with Japan, the key strength of Rakuten’s ecosystem. As of the end of December 2021, Rakuten had NT$8.2 billion in deposits.

Chunghwa Telecom-backed Next Bank just launched, so it is a bit early to be coming to conclusions about its business strategy. Yet like Line and Rakuten, it does not appear to have any especially innovative business model.

That is not entirely the fault of the digital lenders. Thus far, Taiwan’s financial regulator, the Financial Supervisory Commission (FSC), has been more concerned about ensuring the digital banks do not disrupt incumbents too much than facilitating innovative digital banking services. The regulator has repeatedly warned the virtual banks against overstepping the narrow boundaries set for them.

With that in mind, it is unclear if Taiwan’s virtual banks will be able to develop compelling value propositions. To reach their full potential, they would need to be “banks for the digital economy” or something to that effect and offer services incumbents do not targeted at younger customers, as is the case in Korea. Korea’s Kakao Bank offers various digital investing services that incumbent banks do not, aimed at retail investors with relatively limited income. In that sense, Kakao is facilitating financial inclusion. Kakao will also soon launch digital insurance after receiving the green light from Korea’s Financial Services Commission this month. K Bank, meanwhile, is partnering with the prominent cryptocurrency exchange Upbit. Anyone who wants to trade crypto on Upbit must do so through K Bank. While crypto remains risky compared to other more mature digital assets, K Bank’s service is nonetheless innovative and forward looking.

More in this category: « How are Mynt's prospects shaping up? The Philippines now has two fintech unicorns »
back to top