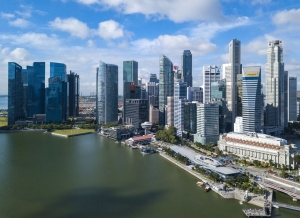 Singapore's largest banks have performed strongly throughout the year, and the third quarter was no exception. In the July to September period, the city-state’s three largest lenders (DBS, OCBC and UOB) once again beat analysts’ forecasts.

No. 3 UOB’s earnings grew at the quickest clip, jumping 57% to S$1.05 billion from S$668 million a year earlier on the back of loan growth, sustained fee income, and lower allowances. This beat both the S$1 billion Bloomberg forecast and S$982.4 million average estimate of four analysts compiled by Refinitiv. UOB’s profits also grew on a quarterly basis, albeit at a more modest pace of 4%, while its earnings through September increased 37% to S$3.06 billion.

DBS had a solid third quarter as well. Singapore’s largest lender posted a profit of S$1.7 billion in the third quarter, up 31% over the S$1.3 billion during the same period in 2020 and beating the S$1.57 billion average forecast compiled by Refinitiv. Growth in fee income and improving asset quality helped drive DBS’s strong earnings growth.

The resilience of Singapore’s three largest lenders amid the pandemic and all the related economic jitters should be a wake-up call for anyone who still thinks that digital banks are going to significantly disrupt their business, especially as the incumbents are not resting on their laurels. Quite the opposite: They have been using the long period between the decision of the MAS to allow digital banks (June 2019) to the time they go live (in 2022) to make themselves more digitally adroit and in some cases, more sustainable.

While remaining cautious on crypto, UOB has inked partnerships with digital asset platforms Marketnode and ADDX. The bank has also signaled interest in CBDCs. “We are working with central banks so that customers can benefit from the use of CBDCs in the coming years,” UOB chief executive Wee Ee Chong said at a recent press conference.

In contrast to UOB, DBS is more bullish on crypto and set up the DBS Digital Exchange in December 2020. The members-only exchange, in which Singapore Exchange (SGX) holds a 10% stake, offers trading of crypto, asset tokenization and digital custody services. The specific trading services include those between bitcoin, bitcoin cash, ethereum and XRP, and U.S., Singapore, Hong Kong dollars and the yen. According to DBS, the exchange is thriving thanks to strong demand from corporate investors, accredited individuals and investment firms that manage the fortunes of wealthy families.

More in this category: « Indonesia embraces digital banking Taiwan wants to keep e-commerce and banking separate »
back to top