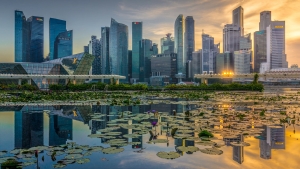 OCBC had the strongest second quarter of the Big 3, with profit rising 59% to S$1.16 billion, slightly ahead of  the forecast of S$1.14 billion of six analysts polled by Bloomberg. Driving the growth in profitability were strong banking and insurance performance, as well as an uptick in wealth management income grew strongly and private banking assets under management. Further, fee income increased to S$563 million from S$440 million a year ago.

With regards to wealth management, OCBC plans to grow that business in both Hong Kong and mainland China. "We have a good presence in Hong Kong and China, and we do want to actually strengthen that. That is very much because we do want to see the synergies between Greater China and Asean,” the bank’s chief executive officer Helen Wong said as the bank reported earnings.

At the moment, it is DBS that has the edge in China, at least the Greater Bay Area market. DBS recently took a 13% stake in Shenzhen Rural Commercial Bank (SZRCR) for RMB 5.29 billion, the Singaporean lender’s largest acquisition in China to date. SZRCR has 5 million active retail customers as well as 170,000 active corporate customers.

"While risks remain, our pipeline remains healthy and we expect business momentum to be sustained in the coming quarters,” Gupta said in a statement.

As for UOB, Singapore’s third-largest lender recorded a 43% increase in earnings to S$1 billion in the second quarter. That figure beat the S$948 million average of three analyst estimates, according to Refinitiv data.

More in this category: « Why are Grab and Bukalapak teaming up? Will Revolut’s travel app give it an edge in Asia? »
back to top