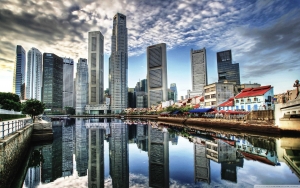 The MAS has set the bar high for DFB licenses to ensure stability among Singapore's digital banks. Burning cash in pursuit of an elusive moment when user numbers magically convert to profitability may work for neobanks in Europe, but not in Singapore. DFB applicants must agree to meet an eventual paid-in capital requirement of $S1.5 billion. No wonder why Revolut decided against applying. DFB applicants almost must be based in Singapore and "controlled by Singaporeans," according to the MAS.

All four reported shortlisted applicants have strong digital ecosystems of one kind or another and all are firmly anchored in Singapore as required by the MAS.

Yet none of them has a particularly exceptional value proposition as a digital bank. For instance, when Sea announced it that it had applied for an application in January, it said it would drive financial innovation in Singapore and target traditionally underserved market segments: millennials and SMEs. Sea highlights its digital wallet SeaMoney. Grab/Singtel, Razer and MatchMove have more or less said the same thing in as many words. They all have existing fintech capabilities.

To be sure, given unpopular fees and customer service issues at traditional Singapore banks, digital upstarts have a chance to grab some market share. But given the close innovation parity among the four reported shortlisted candidates, the MAS may look more closely at their balance sheets to determine the winners.

Among the four, the Grab/Singtel consortium has the advantage of including a major telecoms incumbent. Singtel posted a net profit of S$1.08 billion in the financial year ended March 31. Singtel's strong financials can help offset concerns the MAS may have about Grab's finances. In its eight years of existence, Grab has never been profitable, and the pandemic is not helping matters. In mid-June, the ride-hailing giant said that it would lay off 360 people, or about 5% of its employees. According to The Information, Grab internally in late 2018 forecast a loss of annual S$2 billion in 2019. Grab executives insist the company does not have capitalization issues though.

NYSE-listed and Tencent-backed Sea, the parent company of Singaporean e-commerce firm Shopee, is not profitable either. Its net losses rose 57% to US$1.46 billion in 2019, although total adjusted revenue nearly tripled to US$2.9 billon from US$1 billion in 2018.

In contrast, Hong Kong-listed gaming hardware firm Razer moved out of the red in the second half of 2019 while its revenue for the year hit a record high of US$820.8 million, up 15% from US$712 million in 2018. “We’ve always had a very profitable core,” co-founder and CEO Min-Liang Tan told CNBC in Nov. 2019. “And what we’ve done is take the profits from that core and we have been investing in new businesses … and categories.”

Meanwhile, MatchMove, which like Razer began in gaming, had been targeted profitability in 2020 before the coronavirus outbreak drove the global economy into recession. In early December 2019, CEO Shailesh Naik told Tech In Asia that he expected the company to post a profit in 2020, with the volume of transactions it processes reaching US$2.5 to US$3 billion.

One possible advantage for MatchMove compared to the other three applicants is that it has been laser focused on financial services for years now, not ride hailing, gaming, telecoms or e-commerce. Indeed, MatchMove's existing digital payments services are more comprehensive than those of its competitors.

MatchMove provides "bank-like capabilities" to businesses in a wide range of industries, among them agriculture, aviation and shipping. Under an agreement MatchMove reached with Singapore's Marine Innovation, the fintech offers its banking-as-a-service platform to the shipping company for corporate payroll, expense management and cross-border remittances.