Singapore's banking heavyweights are ready for the challengers 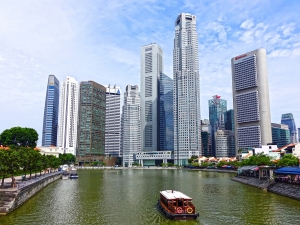 Singapore may be the Lion City, but there's an elephant in the room when it comes to digital banking: Incumbents are readier than ever for the challengers. Singapore's Big Three of DBS, OCBC and UOB have been digitizing for years with varied degrees of success. The pandemic gave them an opportunity to fast track the process. After all, when retail branches are closed and everyone stays home, banking digitally becomes a necessity, not a convenience.

If Singapore's neobanks were live, they could surely capture some of the new cashless business. Their counterparts in Hong Kong probably will. Unfortunately, the pandemic has delayed the launch of Singapore's digital banks until mid-2021. In the meantime, incumbents are transitioning to a digital-first banking world.

From January to March, DBS said its volume of cashless transactions doubled year-on-year, while cash withdrawals and deposits fell at a record 11%. About 100,000 DBS customers began spending online for the first time.

Standard Chartered has similarly seen a surge in digital banking, with digital sign-ups for credit cards rising 71% year-on-year from January to April, and a doubling of digital wealth and investment-related transactions during that period.

In April, OCBC introduced Google Pay's peer-to-peer (P2P) funds transfer service to Singapore. The tie-up allows OCBC customers to use the Google Pay app to pay directly from their bank accounts to anyone registered with local funds transfer service PayNow. Customers can make real-time money transfers to contacts whose bank accounts are linked to their mobile numbers. OCBC customers can also use their credit cards on the Google Pay app.

During Singapore's circuit breaker period, OCBC moved its wealth advisory services online, including the sale of unit trusts, structured investments, bonds, and foreign exchange products. About 1,000 advisors began conducting meetings and sales advisory remotely. Sales rose 45% within the first 10 days of the April 18 launch compared to the prior 10-day period, OCBC said in a press release.

"While many customers are still accustomed to face-to-face interactions with our bankers, even after the Covid-19 outbreak, this virtual process will become a new normal," Sunny Quek, OCBC head of consumer financial services, said in a statement.

By the time, Singapore's digital banks launch, the incumbents will have had an additional nine months to fine-tune their shift online. It won't be easy to pry retail banking customers away from their primary banks, unless the digibanks resort to gimmicks like unusually high deposit rates, generous cashback and the like. And those promotional tactics aren't sustainable in the long run.

To be sure, platform companies like Grab, Sea and Razer - all in the running for a Singapore digital full bank license that allows the licensee to serve both retail and non-retail customers - have strong digital services ecosystems that offer a huge potential customer base, but customer numbers don't matter if the deposit base is low. The neobanks won't make money if their customers use them sparingly and keep the lion's share of their money in incumbent banks.

The SME market, historically underserved in Singapore, probably offers better prospects for the newcomers. Just ask the smart money, like Ant Group. The Chinese fintech giant applied for a digital wholesale bank (DWB) license, which can only be used to serve non-retail customers.

More in this category: « Where will Taiwan's new fintech roadmap lead? ByteDance pivots to fintech in Asia »
back to top