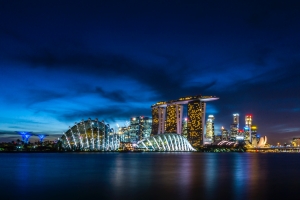 Singapore has never been as large a financial center as Hong Kong. In every major traditional area of finance, Hong Kong has an edge. That is not the case in fintech, where Singapore's Asean location is a boon. The world's preeminent tech giants and venture capitalists have all descended on Southeast Asia, where the underbanked are legion, regulators are keen to boost financial inclusion, and consumers are digitally adroit. Singapore is ideally positioned to take advantage of this opportunity.

That's why the Lion City has been bullish about fintech since before it was a buzzword. The Monetary Authority of Singapore (MAS) has supported its development while urging startups to cooperate with incumbents rather than simply disrupt them.

Accenture estimates that investors ploughed $735 million into Singapore fintechs from January-September 2019, up 69% annually and surpassing the $642 million for all of 2018. The top areas for investments are payments (34%), lending (20%) and insurtech (17%).

Five of Singapore's largest fintech deals ever took place in the first half of 2019, according to The Business Times. Those include cloud company Deskera raising US$100 million in May, financial product marketplace GoBear's US$80 million fundraising round (also in May), and cashback platform Shopback closing a $45 million equity-funding round in April.

"There's a lot brewing in the Singapore fintech ecosystem, and this steady flow of funds shows investors' confidence in the industry’s future growth potential," Divyesh Vithlani, a managing director at Accenture and Asean Financial Services practice lead, said in an August research report.

Going forward, the unrest roiling Hong Kong will likely result in more fintech investment going to Singapore. A 2019 survey of 120 companies by the American Chamber of Commerce in Hong Kong found that 23% of companies with a Hong Kong office may shift business functions from the city. 90% of them say Singapore is their first choice.

London-based Revolut, one of Europe's preeminent challenger banks, established its Asia headquarters in Singapore last year. We expect other major neobanks expanding to Asia from the West will follow suit.

More in this category: « 2020 Top Ten Asia Fintech Trends #2: Battle of the super-app hopefuls: Grab vs. Gojek Australian challenger banks live up to their name »
back to top