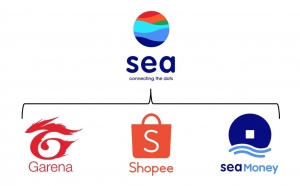 Sea is following a similar trajectory as its backer Tencent, which holds a 40% share in the company. Before Tencent was one of China’s two fintech giants, it was a successful gaming company. Gaming still generates most of Tencent’s profits, but fintech and related services now account for about 25%. Sea is aiming to move in a similar direction, but with a twist: It has a fast-growing e-commerce arm, Shopee.

The triumvirate of gaming (the sole profitable unit for now), e-commerce and fintech gives Sea a unique digital services ecosystem, with the former two units able to feed customers into the smaller digital finance arm. For instance, Sea won a digital full bank license in Singapore, which allows it to serve both retail and corporate customers. While Singapore is not exactly underbanked, it does have one of the world’s highest gross savings rate – about 45%. If Sea can convince just a modest number of the city-state’s citizens to use its banking services, it can likely grow its deposit base quickly. The company has easy access to these potential customers thanks to the popularity of Shopee in Singapore and to a lesser degree, Garena, its gaming unit.

Sea is not stopping there. It recently acquired Indonesia’s Bank BKE and will rejig it as a digital lender. Indonesia has 83 million unbanked people. In that market, Sea has the chance to become the primary lender for the majority of its customers. And once again, Sea has easy access to a huge number of potential customers because Shopee is the leading e-commerce platform by several metrics.

Although Sea will have to spend heavily to grow its digital finance business in those three markets, its ability to raise capital cheaply on the NYSE means that money will not be an issue, as long as the company continues to impress investors.

At this point, the biggest risk Sea faces is that it overextends itself and burns too much cash in the process that could be used for more productive endeavors. The company recently expanded into Latin America, a region far from home its home base where it has minimal experience.

More in this category: « Will Traveloka’s fintech gambit succeed? Viva Republica and Big Fintech in South Korea »
back to top