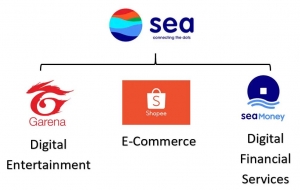 Southeast Asia is the most dynamic market for the digital economy in the world, especially e-commerce and fintech. It has a population of 655.3 million, which ought to be big enough for most young tech companies. Not Sea Group though. Sea has done well in the region, but like many platform companies, it is getting overly ambitious, overextending itself, and making costly mistakes.

We cannot blame Tencent-backed Sea for getting ahead of itself. For years, the company could no wrong in investors’ eyes. Its stock rose 2300% from 2017 to 2021 and Sea became Southeast Asia’s most valuable listed company and the world's top performing stock at one point in 2020.

However, Sea has been losing money in its e-commerce and fintech divisions all along, with the gaming arm Garena picking up the slack. To believe in Sea, one must  believe that eventually Shopee and Sea Money will turn profitable. Otherwise, Sea is just a successful gaming company within an unsuccessful platform company. The problem is that Garena’s growth is slowing while neither Shopee nor Sea Money is yet a moneymaker.

Against this backdrop, Sea has expanded to Latin America (with Brazil a key area of focus), India, France and Poland. While the Brazil business seems to be doing well, the others are not. Sea has exited France and is in the process of pulling out of India’s retail market after New Delhi banned its Free Fire game allegedly over links to China – assumedly Tencent’s stake in Sea.

It is perhaps for the best that Sea leaves the ultra-competitive Indian retail market. On the one hand, the general business environment for foreign tech firms in India is getting tougher, especially e-commerce given India’s tendency to protect domestic retailers. Shopee had in recent months faced boycott calls from such competitors in India. At the same time, Sea cannot afford to subsidize Shopee’s growth in India, or ShopeePay’s for that matter.

Having lost 59% of its market capitalization in the past six months, the time period that corresponds with its recent international expansion drive, Sea should take the hint from investors and reorient towards Southeast Asia, the region it knows best and where it has the most competitive advantages. Markets where Sea has made inroads in digital financial services likely offer the best prospects for the company. These include Singapore (Sea won a digibanking license there), Malaysia (Sea has applied for one) and Indonesia (Sea bought Bank BKE and rejigged it as a digital lender).

Indeed, Sea sees Indonesia as vital to its business. Yet the Singaporean firm faces considerable competition in Indonesia, from both Grab and GoTo, as well as the many conglomerates that are moving into digital financial services in the country. In GoTo's case, once it lists on the Indonesia Stock Exchange (set for April 11), the Indonesian firm will be able to raise cash as cheaply as Sea. GoTo also has a home court advantage in Indonesia, and can devote all of its resources to succeeding in that market.

Ultimately, Sea needs to be careful about spreading itself too thin. The company would be better off being profitable in a few Southeast Asian countries than unsuccessful in dozens of markets globally.

More in this category: « Malaysia’s digital banking race is not over yet Australian casinos face allegations of serious money laundering breaches »
back to top