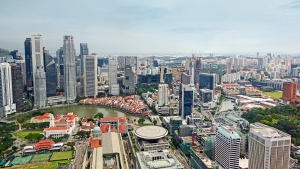 Sea Group is closing in on one of two Singapore digital full bank licenses (DFB). Although Sea's losses doubled in the third quarter to US$425.3 million, the company's revenue surged 99% to reach $1.21 billion. Instrumental to that brisk revenue growth is Shopee, which is fast becoming one of Southeast Asia's premier e-commerce platforms. The integration of e-commerce, digital finance (SeaMoney) and gaming (Garena) into a digital services ecosystem with broad reach should be a winning combination for Sea.

Among DFB finalists, only the Grab-Singtel consortium brings as much or more to the table. Since the MAS will award two DFBSs, Grab-Singtel and Sea can both be winners. Grab-Singtel caters to different market segments than Sea, given the decacorn's core ride-hailing and food-delivery businesses, and Singtel's telecoms business.

Auguring well for Sea's prospects is investor sentiment. The NYSE-listed firm has seen its market capitalization surge more than fourfold since January to over S$80 billion. Sea is now Southeast Asia's most valuable public company. Investors are likely betting that the shift to online entertainment and shopping is permanent, or at least that demand for such digital services will only grow more sharply in the future.

With that in mind, Sea is well positioned to serve several underserved banking segments in Singapore and beyond. First, Sea can tap the youth market - the one that Razer always talks about - through Garena. About 65 million of Sea's 572 million+ active gaming users already spend money on games. Some use the SeaMoney e-wallet. Sea can easily offer deposit-taking and lending services to this market segment if has a digital banking license.

At the same time, Sea can tap the SME market by offering digital banking services to the 11,000 Shopee merchants who already sell their wares on the platform. In the third quarter, there were 741.6 million orders on Shopee, up almost 131% annually. Because of Shopee's regional presence, there is a huge potential market of SMEs. In the region's largest economy, Indonesia, Shopee recorded more than 310 million orders in the third quarter. According to AppAnnie, Shopee is Indonesia' top e-commerce platform by average monthly active users, downloads, and total time spent in app on Android.

To be sure, Sea's digital banking bid faces several obstacles. One is the company's failure to turn a profit. Spending on sales, marketing and hiring is outstripping revenue growth. E-commerce growth also slowed to 16% in the third quarter, compared to 29% in the April to June period.

Yet none of the major tech companies applying for a Singapore DFB is profitable: not Grab, nor Razer, nor MatchMove. Having a clear path to profitability - and being able to stay on it - is what matters here, not being profitable now.

It is conceivable that the MatchMove/Singapura Finance consortium could edge out Sea thanks to its unique focus on banking as a service. A financial industry source quoted by The Ken said MatchMove's value proposition "is that they can build an app store for banks," a service not currently available in Singapore.

Another wildcard for Sea's application is Tencent's investment in the company. The Chinese internet giant holds a 34% stake in Sea. From a business standpoint, having access to Tencent's resources and knowledge of digital banking would be a boon for Sea as it stepped up its own fintech play. However, China has launched a crackdown on microlending that has already forced a suspension of Ant Group's IPO. It is possible other Chinese fintechs could be ensnared in the crackdown.

More in this category: « Singapore steps up fight against financial crime Kakao is dominating South Korea's nascent digibanking sector »
back to top