Sea doesn't need to be a super app to thrive 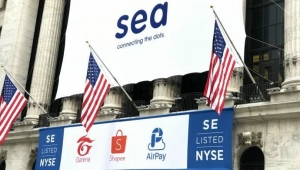 Platform companies counting on digibanking to lift their fortunes now routinely refer to themselves as "super apps" in the vein of China's WeChat. The two most prominent of them are Grab and Gojek, Southeast Asia's two most valuable startups. But being super and profitable are not one and the same. Under pressure from investors to reduce their cash burn and produce a viable exit strategy, both companies have sought a game-changing merger that could help them establish market dominance in digital banking. The M&A activity is accelerating pace as Grab and Gojek lose ground to Sea Group in Indonesia, Southeast Asia's largest economy.

Despite not going the super app route, Sea has still built the strongest digital services ecosystem of any Southeast Asia-based platform company. A small array of complementary services have been integral to its success: gaming, e-commerce and fintech. Gaming and e-commerce are both fast-growing businesses in Southeast Asia. Meanwhile, Sea can draw digibanking customers from its youthful gamers - About 65 million of Sea's 572 million+ active gaming users already spend money on games - as well as e-commerce shoppers and merchants. Sea uses subsidies to encourage user adoption, but not to the same degree as Grab and Gojek. Its cash burn is thus less problematic.

Since Sea is listed on the NYSE, its performance is easy to track. The company's losses doubled in the third quarter to US$425.3 million, yet revenue jumped 99% to reach $1.21 billion. Shopee's success in Indonesia drove much of that surge. In the third quarter, there were more than 741 million orders on Shopee, up almost 131% year-on-year. 310 million of the orders came from Indonesia. Shopee is Indonesia' top e-commerce platform by average monthly active users, downloads, and total time spent in app on Android, according to AppAnnie.

DBS estimates that growth in the gross merchandise value of Sea's e-commerce arm may halve from 102% to 50% in the 2021 fiscal year. Still, that is healthy rate of expansion.

Sea recently won a Singapore digital bank license, but that is only valid for use in the city-state. To become a serious player in the Indonesia market, Sea needs a local partner. With that in mind, Sea recently acquired Indonesia's Bank BKE for an undisclosed sum. Sea fully controls the Jakarta-based bank after making the acquisition through its subsidiary Turbo Cash Hong Kong, according to Bloomberg. Sea can now move forward with its digital banking play in Indonesia without having to independently apply for a banking license, a lengthy regulatory process.

Looking ahead, Sea is well poised to win more market share in Indonesia's digibanking market. While expansion is costly, Sea can look to public markets to raise cash cheaply (it raised US$3 billion in December), a luxury Grab and Gojek do not have. Despite having yet to reach profitability (except on an EBITDA basis), Sea seems to have imbued investors with confidence in its prospects. Now that's pretty super.

More in this category: « Grab's fintech business gets a US$300 million shot in the arm Kakao Bank set for a blockbuster year »
back to top