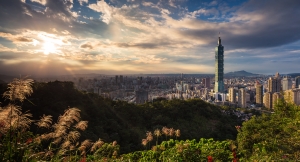 Taiwan may be the only market in Asia that can be called overbanked, making it a true regional outlier. In these commentaries, we usually discuss Asia's unbanked or underbanked populations. In Pakistan, for instance, 100 million people - almost half of the population - do not have a bank account. They are unbanked. The country as a whole is underbanked. In Taiwan, however, nearly every adult has several bank accounts. Taiwanese firms often ask workers to open a bank account at the company's preferred bank. Many people open new accounts each time they change jobs.

When Taiwan liberalized its banking sector in the 1990s, the government didn't foresee the coming surge in small retail banks. Taiwan today has 37 banks with assets of US$1.6 trillion, while the island's population is just 23 million. The banks all have their market niches, but it's hard for them to grow. Margins are thin and returns on assets low for many. Some are expanding offshore and have opened representative offices and/or branches in mainland China as well as Southeast Asia. But without consolidation, no Taiwanese bank will be large enough to compete with the likes of heavyweights from the U.S., Europe, Japan or mainland China.

Taiwanese regulators have had limited success addressing the consolidation problem. Taiwan's banking sector did see a wave of 52 consolidations between 2004 and 2015, but most them were not big enough to change the industry landscape. Overall, the number of Taiwanese banks has decreased from 49 to 37 over the past fifteen years.

Analysts say that some of the small private banks are content with their earnings while larger ones don't want to shell out the cash for costly mergers. The government could pressure the state sector to consolidate, but would face fierce opposition given the inevitable layoffs involved.

Last November, the Financial Supervisory Commission (FSC) implemented rules that allow smaller shareholders to promote consolidation, reducing the minimum stake a financial institution must have in its target to 10% from the previous 25%.

Culturally, the Taiwan banking sector tends to be highly conservative. The three biggest financial holding companies, CTBC, Cathay and Fubon, are all family businesses. It's hard to imagine them joining forces, even though doing so might be the only way for them to develop a significant global footprint.

Without consolidation, not only will Taiwan's traditional banks' growth be constrained, but the island's nascent digital banking segment will face headwinds. The FSC is set to issue two virtual-banking licenses in June, which will pave the way for two internet-only banks to enter the crowded Taiwan market. Close watchers of the Taiwanese financial sector are questioning why the government is introducing yet more competition into the market without taking stronger measures to promote consolidation.

More in this category: « An Overview of Pingan's OneConnect South Korea holds off on issuance of new internet banking licenses »
back to top