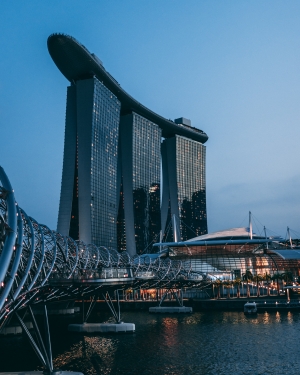 Neobanks are coming soon to Singapore, but the top incumbents appear cool as cucumbers. That's largely because the Monetary Authority of Singapore (MAS) favors a gradualist approach to fintech, rather than a disruptive one. When possible, the regulator encourages incumbents and fintechs to join hands.

Overseas Chinese Banking Corporation (OCBC), Singapore's longest established bank, is following that cooperative route favored by the MAS. Compared to its rivals UOB and DBS, OCBC "is a laggard...in the digitializing processes" according to a September research note by CGS-CIMB but is now eyeing one of Singapore's coveted digital-banking licenses.

In a November interview with Bloomberg News, OCBC chief executive officer Samuel Tsien said that the bank "had agreed in principle" to join a consortium that would apply for a digital-banking license by year-end. The group includes the venture-capital arm of Temasek Holdings and peer-to-peer lender Validus Capital.

If there ever was a way to smoothly co-opt potential fintech disruptors, it would be to have them apply together with neobanks for a digital-banking license. It probably represents the best compromise for a regulator that wishes to modestly increase competition in the market while gently pushing along incumbents on the path to digital literacy. The end result - in theory - would be more innovative banking services that provide higher value to consumers and grow the businesses of suppliers.

For fintechs, having a partner like OCBC would help assuage any regulatory concerns and perhaps head off any potential additional restrictions on their business operations. In an FAQ posted on its official website, MAS makes clear it will be watching the new digital banks carefully.

"When digital banks commence operations, MAS will monitor the market dynamics and, where necessary, impose additional supervisory requirements or restrictions to deter any value-destructive behaviour. The aim is to deter unsustainable banking practices, and to preserve a level playing field among banks," the regulator said.

Given the inherent strengths of the Lion City's traditional lenders, and the compromises that would be entailed in sharing a digital-banking license with one of them, some Singapore-based fintechs are opting to remain independent - even if that means they can't obtain the same privileges as competitors with a banking license.

Instead, Nium will focus on its core cross-border payments business, which is active across 40 markets including Hong Kong, Indonesia, Japan and EU countries. Currently, Nium is trying to expand to Mexico and Brazil.

More in this category: « Will the Hong Kong fintech sector continue to grow in 2020? Hong Kong's virtual banks face uncertain future »
back to top