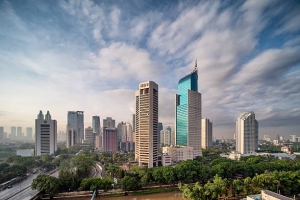 As one of the largest Asian economies to greenlight digital banks, Indonesia is attracting a lot of interest from investors. Digital lenders in Indonesia are not competing for mostly secondary accounts as they are in markets like Hong Kong and Singapore. Instead, they are trying to get in on the ground floor. About 66% of Indonesia’s 275 million people are unbanked.

Indonesia is not just a huge market, it is also one amenable to digital banking. There is not a lot of resistance to the idea as seen in some developed markets. A recent McKinsey report found that 78% of Indonesians use digital banking (via a mobile banking app or web-based) at least once weekly, compared to 57% in 2017.

Unsurprisingly, Big Tech wants a big piece of the market. The digital banking business model, however, is once again different from Hong Kong and Singapore, where regulators are keen to see digital lenders set up from scratch. It appears that the Indonesia regulator, the OJK, would prefer that incumbent banks morph into digital lenders. That can happen in several ways. For instance, large tech companies may buy incumbent banks and rejig them – in one way or another – for the digital era. In the past year or so, both Sea Group and Gojek have taken stakes in existing Indonesian banks and said they would revamp them as digital lenders. Such an approach gives the tech companies access to a significant existing customer base, while the incumbents benefit from the digital savvy of Big Tech.

M&A activity is likely to accelerate as competition intensifies and indeed, January was a busy month for deal-making. Early in the month, Indonesian e-commerce firm Bukalapak.com, conglomerate Salim Group and a subsidiary of super app Grab all said they would subscribe to a planned 4.8 trillion rupiah (US$335.55 million) rights issue by Allo Bank. That lender, owned by Indonesian tycoon Chairul Tanjung, started off as a traditional bank in 1992. In 2021 it successfully applied for a digital banking license in Indonesia.

Also in January, Grab and Singtel invested in Bank Fama International, a small, private Indonesian lender. According to Nikkei Asia, Singtel acquired 2.4 billion new shares issued by Bank Fama for a cash consideration of 500 billion rupiah (US$34.8 million). Singtel’s stake “is the same as Grab's, meaning the Singaporean companies own 32.5% of Bank Fama,” Nikkei said in a January 21 report.

The endgame for all these tech firms foraying into banking is the construction of a winning digital services ecosystem, a project that has thus far proved elusive for most platform companies outside of China (Alibaba, WeChat) and Korea (Kakao). The hope is that digital financial services can eventually be profitable enough to both stand on its own and perhaps negate losses in other parts of the ecosystem.

More in this category: « Digital financial crime poses rising threat to Singapore Assessing Taiwan’s virtual banks one year on »
back to top