Is Vietnam the next hotbed for fintech? 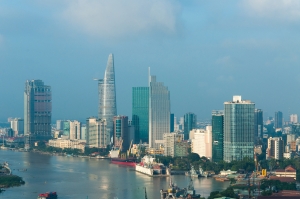 With its underdeveloped banking sector, Vietnam is a prime market for digital financial services. Thus far the pace of development has been modest, but analysts expect it will speed up considerably in the next few years. In a November report, ratings agency Moody's said that startups focused on payments were the most prevalent in the nascent Vietnam fintech segment. By some estimates, payments startups account for almost 50% of Vietnam's fintech firms. Vietnam also has about 25 fintech incubators, accelerators and innovation labs.

Among Vietnam's leading fintech startups: MoMo, 123Pay, Mobivi, NganLuong, and Payoo. MoMo is the preeminent mobile wallet firm in Vietnam. Research by The Asian Banker found that the company had 2 million registered users at the end of 2016, making up 70-80% of Vietnam's total mobile wallet market. The company aims to reach 7 million e-wallet users and employ 11,000 agents.

There are a few Vietnamese banks that are embracing fintech, including VPBank, Maritime Bank and VIB. In September, VPBank launched the dedicated digital bank YOLO, which it described as "digital banking for the youth" in a statement. Noting that 70% of Vietnam's population is underbanked, the statement said that YOLO would provide customers with a suite of financial services and other services catering to daily needs, including transportation, travel, entertainment and restaurant reservations.

Still, total fintech investment in Vietnam in 2017 was just US$3 million. To put that figure into perspective, compare it to Southeast Asia's leading fintech hub, Singapore. In 2017, Singapore pulled in $983.6 million in fintech investment, according to data compiled by the city-state's government.

Analysts say that the Vietnamese government is eager to spur fintech innovation in a bid to boost financial inclusion and become a cashless society by 2025. With a young, tech savvy population of 96 million - 70% who are younger than 35 - Vietnam is well poised to go cashless - or at least mostly cash free. Its people are less attached to cash than those in developed East Asian economies like Taiwan, Hong Kong, Japan and South Korea. The country also benefits from high internet and smartphone penetration rates in urban centers, an ascendant e-commerce sector and strong economic growth. Vietnam's economy was forecast to expand 6.5% to 6.8% in 2018 and the government has set an annual growth target of 6.6% to 6.8% for 2019.

More in this category: « Tougher regulation on the horizon for the Australian financial industry but finding the right balance is critical South Korea poised for blockchain boom »
back to top