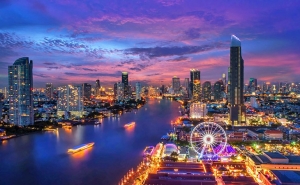 Thailand is late to Asia’s digital banking party, which formally began back in 2019 when Hong Kong and Singapore approved them – though South Korea had digital banks as early as 2017. Since Asia’s two main financial centers embraced digital banks, Taiwan, the Philippines, Indonesia and Malaysia have followed suit. Until now, middle-income and well-banked (85% of the population has a bank account) Thailand has been a hold-out. A recent announcement by the kingdom’s central bank suggests a change of direction.

On February 1, the Bank of Thailand (BOT) said in a virtual briefing that it plans to issue guidelines for digital banks by June and may allow both non-banks and existing lenders to apply for licenses. The central bank also plans to scrap a limit on the amount commercial banks can invest in fintech, with the exception of digital assets.

“We expect to see more competition and innovations by allowing virtual banking and it will benefit depositors,” BOT Assistant Director Roong Mallikamas said at the virtual briefing. “No one will stay still. Existing players will also adjust.”

For well-banked countries, digital banks are almost always nice to have rather than a necessity. Yet Thailand cannot stand still while the rest of the region fast-tracks digitization of the financial sector. Among the major economies of Southeast Asia, it is the only country besides Vietnam that has yet to develop a framework for digital banks. Without one, Thailand risks falling behind its neighbors and reducing the competitiveness of its financial services sector.

Like Malaysia, Thailand can probably use digital banks and their branchless infrastructure to boost financial inclusion in underbanked rural areas of the country.

The nascent Thai model for digital banks will likely favor three types of applicants. One type will be deep-pocketed incumbents already foraying into fintech. Thailand has several of these already, like Siam Commercial Bank (SCB), which has a large fintech investment arm, and Kasikorn Bank, which has a partnership with Japan’s super app Line that focuses on digital financial services. The other will be Big Tech, in particular any Southeast Asian super apps that already operate in Thailand. The third will be large conglomerates that want to expand into digital financial services.

Standalone digital lenders starting from scratch are also possible, but such startups have been much more common in the West than Asia, where regulators prefer digital banks to be resistant to failure. Unless capitalization requirements are relatively light, we do not expect to see such companies among the applicants.

More in this category: « Kakao comes down to earth Big Tech and tycoons join forces: Indonesia’s emerging digibanking model »
back to top