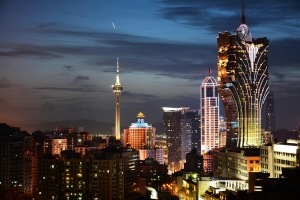 The Chinese gambling hub of Macau has a well deserved reputation for illicit activity. Although the territory has prospered in the two decades since returning to Chinese rule, overtaking Las Vegas to become the top gaming destination globally, the sources of its riches have sometimes been questionable. Corrupt officals and businessmen as well as criminal organizations launder money through the territory, taking advantage of its lax regulatory environment. Macau has no currency or exchange controls, while its threshold for reporting transactions in casinos is more than US$62,000, compared to an international standard of US$3,000.

In an April report, the United States Department of State once again named Macau to its list of destinations vulnerable to money laundering. The report said that Macau's anti-money laundering (AML) efforts continue to fall short, noting that there have been a negligible number of money laundering convictions in recent years.

In June, the United Nations Office on Drugs and Crime published a report that said criminal organizations active in Asia use poorly regulated Macau casinos to launder proceeds from a wide range of illegal activities, including the sale of drugs, counterfeit goods and medicines and the trafficking of people and wildlife.

“Macau has for a long time been seen as a place to launder money and for organized crime to do business, and while times and methods have changed it still unfortunately seen this way by many,” Jeremy Douglas, UNODC's Regional Representative for Southeast Asia and the Pacific, told the Macau News Agency.

The Macau government maintains that it is proactively undertaking AML work. Speaking at an AML industry event in June, Paulo Martins Chan, head of

of Macau's casino regulator, said that Macau is “refining its supervision of the industry."

To be sure, Macau has made some modest progress in AML. In November 2017, Macau began requiring visitors carrying US$15,000 or more in cash to make a declaration to the city's authorities. In 2018, Macau cracked down on the use of UnionPay cards to evade China's strict capital controls by removing UnionPay point-of-sale machines from pawn shops. Before the crackdown Chinese customers at pawn shops had been buying expensive jewelry - up to US$1.5 million - with their UnionPay cards and then selling it right back to the shops for cash. Others swiped their card without buying anything - and then got cash back from the shops.

Overall, analysts say that stricter regulations are needed to make laundering money through Macau more difficult. Lowering the casino transaction threshold to $3,000 would be a good start. Compliance among junkets, who are responsible for bringing in most of Macau's high rollers, must also be improved. The US State Department advises Macau to continue pushing smaller junkets, who have fundamentally weak AML controls, to exit the market. In contrast, larger junkets have the resources to develop comprehensive compliance systems.

Tags:
More in this category: « If all the Bank IT managers were Googlers Will a closer EU-China partnership stop the trade war? »
back to top