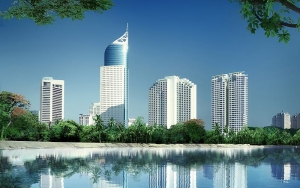 2022 looks to be a break-out year for the Indonesia digibanking sector. With the largest unbanked population and economy in Southeast Asia, a unique island geography not conducive to a physical branch network, plus rising smartphone penetration and internet connectivity, Indonesia offers arguably the most low-hanging fruit of any market in the region.

Keen to grab some of it, deep-pocketed and ambitious Asian platform companies dominated earlier dealmaking in the market: Alibaba, Gojek, Grab and Sea Group. Acquisitions have allowed platform companies in some cases to rejig incumbent banks as digital lenders, such as Gojek-backed Bank Jago, Sea Group’s Seabank Indonesia or Alibaba-backed Akulaku’s Bank Neo Commerce. Grab and Singtel have also partnered take a stake in Bank Fama.

This pattern reflects Indonesia’s unique approach to online banking, in which incumbents are more likely to get a makeover than entirely new digital entities formed. The Financial Services Authority of Indonesia (OJK) seems to have decided on this model – though it need not be tech companies making the acquisitions; the country’s conglomerates are also investing in digital banks – as the best way to bring the banking industry into the digital age.

The recent FinAccel-PT Bank Bisnis Internasional deal is significant in that it marks the first time a BNPL firm has taken a majority stake in an Indonesian lender. FinAccel, the parent company of Kredivo, paid around $200 million to secure a 75% stake in the Indonesian lender in a bid to expand beyond cash-burning BNPL into more profitable services, especially larger-ticket loans. FinAccel will likely aim to show investors that it can function as a profitable bank before going ahead with an anticipated IPO. In March, the company suspended a listing originally planned for August on the Nasdaq, citing adverse market conditions.

Meanwhile, Funding Societies and Carro will focus on Indonesia’s significant market of underserved SMEs. According to the World Bank’s International Finance Corporation (IFC), Indonesian SMEs account for 90% of the labor force and 60% of GDP. Yet despite their contribution to the economy, it is estimated that about 80% of them are underfinanced.