How long will it take for Malaysia to go cashless? 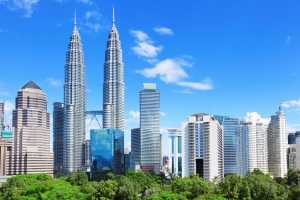 Nearly a decade ago, Malaysian regulators outlined a goal to reduce dependence on cash by 2020, targeting 200 annual e-payment transactions per person, compared to 44 in 2010. It is likely BNM will meet and even exceed that modest goal, but a cashless society remains elusive in the short term.

To be sure, Malaysians are warming to digital finance as the county's e-commerce market grows. Data from BNM show 833.9 million internet banking transactions from January-November 2018, up from 741.9 million a year earlier and 588.2 million in 2016.

Mobile banking has steadily risen as well over the past three years, with

Malaysians regularly pay for goods with debit cards or through internet banking, but those payments tend to be for big purchases. They prefer cash for lower value everyday transactions and incidental expenditures. Mobile wallet penetration remains in the single digits.

That could certainly change given the country's high smartphone penetration rate and tech-savvy young population. It could be that mobile internet services targeting young consumers spur broader adoption of mobile wallets.

Still, cash has its place in Malaysia, say some industry experts. “In my view, cash is the efficient payment system for low-value transactions because these are free, universally accepted and instantly settled between parties," Hari Sivan, founder and CEO of fintech startup Cash Pte Ltd. told The Edge Malaysia in a January interview. Sivan questioned if a cashless economy was right for Malaysia, suggesting it might be "mostly paid propaganda financed by payment intermediaries, who are driven by the potential of recurring revenue and data collection opportunities."

Of course, Malaysians have security concerns about cashless payments and want to ensure that their data privacy is respected. Given the interest in data collection amongst many businesses, that's an understandable concern. It's also hardly unique to Malaysia. Every country that's adopting digital finance solutions has to grapple with these challenges.

More specific to Malaysia is the disparity between residents of its cities and countryside. While urban residents are well versed in online banking, digital finance has yet to make significant inroads in rural Malaysia, home to about 25% of the country's population of 31.6 million. In a January interview with Free Malaysia Today News, Payments Network Malaysia Sdn Bhd (PayNet) Group CEO Peter Schiesser said that Malaysia would need two decades to go cashless. It will take time for rural residents reliant on cash to familiarize themselves with cashless payments and boost their financial literacy, he said.

More in this category: « Eyeing fintech, Grab steps up bid to be Asean's 'super app' Can Go-Jek be a fintech sensation? »
back to top