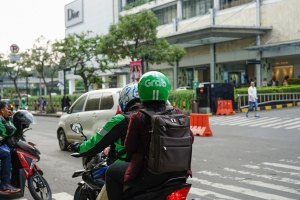 There are many reasons to be circumspect about Grab's digital banking venture. Firstly, the company has been around for eight years but remains unprofitable. It has burned cash on costly operations across Southeast Asia. Ride-hailing is not all it was cracked up to be, as investors have learned from the middling performance of Uber's shares since its underwhelming IPO a year ago. According to The Information, Grab had internally projected a net loss of US$1.5 billion in 2019.

In those heady pre-coronavirus days, VCs shrugged off Grab's losses. After all, the company was building scale. It had triumphed over Uber in Southeast Asia. It had troves of user data that could be the building blocks for a killer digital banking app. As late as February, Grab raised another US$850 million from investors, at a valuation of US$5.5 billion. For everyone keeping track, that was Grab's Series I funding round. Yes, Series I.

Grab's largest backer is SoftBank, which has been on a losing streak with its tech startup bets. The Japanese firm's investment portfolio also includes WeWork, Uber and India's Paytm - a fintech unicorn deep in the red.

The pandemic-induced downturn may finally force Grab and its backers to change course. In April, Grab CEO Anthony Tan said the pandemic was the most severe crisis the company has faced as its ride-hailing business dropped by double digits in some markets.

In a May Reuters interview, Grab co-founder Tan Hooi Ling said that the firm's core ride-hailing business had fallen amid the pandemic even as food and parcel deliveries have risen. Grab's total revenue is “lower than it used to be pre-COVID," she said. “During this time, we are preparing for the worst case scenario, which is potentially a very long winter.”

The winter could set in despite growth in Grab's fintech business. The company has seen wider use of the GrabPay wallet as people eschew cash for contactless payments, notably in the Philippines. Yet GrabPay contributes much less to Grab's bottom line than ride hailing.

With its large warchest, Grab is unlikely to end up in dire straits anytime soon. But as losses mount, ride hailing could become a larger drag on its fintech ambitions. On the one hand, Grab needs to conserve cash to develop its digital banking business. Should it and Singtel win a DFB in Singapore, Grab will need to spend money to get the business up and running.

At the same time, if Grab's financial situation becomes more precarious, the Monetary Authority of Singapore (MAS) may reject its application. The regulator has set the bar high for applicants in terms of their balance sheets.

More in this category: « South Korea's Toss breaks even for the first time amid pandemic How did Judo become Australia's first neobank unicorn? »
back to top