Hong Kong's future as a financial center at a crossroads 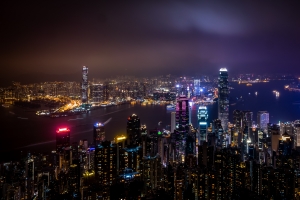 Well before COVID-19 broke out, Hong Kong's future as a global financial center was in question. The protests that broke out last year have raised concerns about the city's ability to maintain its unique competitive strengths. Further erosion of political stability and the rule of law will augur ill prospects for the former British colony. In the short run, it is true that none of Hong Kong's neighbors can challenge its position as the region's preeminent financial center. But Hong Kong cannot assume that will never change.

Thus far, Hong Kong has managed to contain the local spread of the novel coronavirus. As of mid-March, there were 131 cases, less than in financial-center competitor Singapore. To stymie the contagion's spread, the Hong Kong government has suspended all train, bus and ferry service with the mainland. Since early February, any visitors arriving from the mainland have been subject to a 14-day mandatory quarantine. With that emergency measure, the Hong Kong government accomplished a de facto shutdown of the border with the mainland while avoiding the political fallout from formally closing it. Further, Hong Kong's schools are closed until at least April 20. Many businesses are not operating either.

When there is a suspected case, the Hong Kong government aggressively tracks it and quarantines anyone who has been exposed to the infected individual. About 12,000 people were quarantined at one point in February.

The economic costs from these dramatic measures will be heavy, especially for the anemic Hong Kong economy. Hong Kong was already in a recession - its first in over a decade - when COVID-19 struck.

Still, the upside to Hong Kong's approach is clear: The city is safeguarding its residents' health in the face of a deadly pathogen, even if there are some big inconveniences. Like its neighbor Taiwan, Hong Kong has chilling memories of the 2003 SARS outbreak - also caused by a coronavirus - which originated in Guangdong Province. 299 of the 744 deaths caused by SARS occurred in Hong Kong, the most globally. Hong Kong would rather be safe than sorry.

While Hong Kong's ability to contain COVID-19 is commendable, businesses are looking for a sign that the government has a long-term plan to maintain the city's competitiveness. "Executives are eager and anxious for signs of visionary leadership, and more effective communication," wrote Tara Joseph, president of the American Chamber of Commerce in Hong Kong, in a March commentary for The South China Morning Post.

Ironically, Hong Kong built its reputation as a global hub for capital on a penchant for laissez-faire economics. Today, however, a hands-off approach will no longer do.

In the meantime, Hong Kong's financial industry will move closer to the mainland. The city's stock exchange is attractive to Chinese firms which want to raise capital from global investors. Given the terse state of U.S.-China relations, the Hong Kong Stock Exchange is a safer bet for them than the NYSE or Nasdaq.

Hangzhou-based WeDoctor, a digital healthcare startup backed by Tencent and Goldman Sachs, is reportedly planning to raise up to US$1 billion in a Hong Kong IPO in what would be one of the first major listings since the start of the novel coronavirus outbreak. The IPO will likely take place in the second half of the year, Reuters reported.

WeDoctor says it has more than 2010 million registered users - primarily in China - for its online appointment booking, prescription and diagnosis services. The company's network includes 3,200 hospitals and 360,000 doctors.

More in this category: « P2P lending in South Korea faces rising backlash What are Razer's chances of winning a Singapore digital banking license? »
back to top