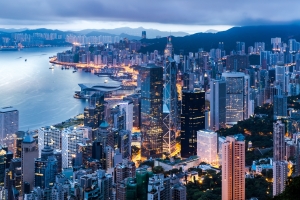 Most of the complaints one hears about Hong Kong these days relate to the zero-Covid policy and how it makes doing business in the city unnecessarily difficult. Unfortunately, zero Covid is highly politicized and remains the official pandemic fighting policy on the mainland. Though Hong Kong has some wiggle room to remove the most onerous zero-Covid restrictions, the city cannot – at least not in the near future – reestablish normal travel links with the mainland. By “normal” we do not just mean quarantine-free travel, but also freedom from onerous Covid testing and the possibility of being required to quarantine if one tests positive. Without these normal travel links, the city’s connectivity to the mainland – and thus its strongest remaining selling point – is undermined.

After all, as Laura Cha Shih May-lung, the chairwoman of Hong Kong Exchanges and Clearing Limited (HKEX) noted at the summit, “Connectivity is what defines our city as an international financial center.”

With that in mind, we should take the optimistic notes struck at the recent finance summit in the city with a grain of salt. To be sure, it is an important step forward to be able to successfully hold large in-person industry events with international participants again, but much work remains to be done before Hong Kong can credibly claim it is “back in business” or “back to normal.”

If we look at the highlights of the three-day event, we see that Hong Kong’s financial future increasingly focuses on mainland business, and especially the Greater Bay Area, rather than the rest of Asia. For instance, Citigroup opened its first global wealth management center in Tsim Sha Tsui to serve dollar-denominated millionaires. SCMP describes the move as “joining rivals HSBC and Standard Chartered in making Hong Kong the beachhead” for accessing the 80,000 or so individuals who meet that definition in the GBA.

Another issue that casts uncertainty over Hong Kong’s future is the ongoing tech crackdown on the mainland. Assuming that the crackdown eases in 2023 – which would make economic sense given how zero Covid has hammered the Chinese economy – a pipeline of tech deals might buoy Hong Kong’s capital markets. However, China’s golden age of consumer tech has passed, and it is unclear what would replace those listings on the HKEX. Perhaps biotech and health tech are the most promising candidates.

Hong Kong IPOs fell 76% year-on-year from January to September, according to KPMG China. While IPO activity improved in the third quarter, with 27 IPOs raising a total of US$6.6 billion, more than twice the proceeds raised during the first two quarters of 2022, the city’s IPO market remains sleepy compared to 2019. That year it raised the most of any market with nearly HK$309 billion ($40 billion) of fundraising.

More in this category: « The Philippines remains on FATF's gray list for now
back to top