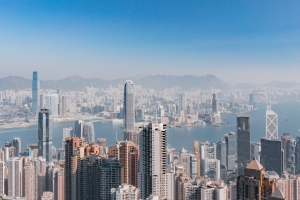 Hong Kong's major banks have long enjoyed high profits. Competition has been limited. A few heavyweights dominate the sector: HSBC, Standard Chartered, Bank of East Asia, Hang Seng. With the arrival of virtual banks earlier this year, the market was already on the cusp of a sea change. Retail banks realized that they would have to up their game to stay dominant. Then political turmoil swept over the former British colony in June, bringing into question its viability as a global financial center.

Choppy waters lie ahead for Hong Kong's banks, which have been battered by protests, the Sino-U.S. trade war and the slowing Chinese economy. It's unlikely that Hong Kong banks' profits per employee will remain higher than any other market. That was what Citigroup analysts found in 2018, a recent Wall Street Journal report noted.

The Hong Kong economy contracted 3.2% year-on-year in the quarter ended September 2019. Since it was the second consecutive quarterly contraction, Hong Kong is now in a technical recession.

As the Federal Reserve continues to slash interest rates, Hong Kong has to move in tandem with the cuts because of its peg to the greenback. That reduces the profitability of lending. Following the Hong Kong Monetary Authority slashing its benchmark interest rate by 25 basis points, HSBC, Standard Chartered Bank and Bank of China (Hong Kong) cut their rates for the first time since the global financial crisis of 2008-09 in a bid to ease pressure on small businesses.

Analysts at JPMorgan Chase reckon that earnings could plummet at Hong Kong banks including Hang Seng and Bank of East Asia in the next two years. Profitability could drop 24% to 45% in 2020 and 39% to 67% in 2021, Bloomberg noted in an October report.

One serious long-term challenge for Hong Kong banks will be holding onto the deposits of ultra-high net worth individuals, especially from the mainland. As a part of China yet with a separate legal and financial system, the city has been a magnet for the deposits of this demographic.

Wracked by political instability, Hong Kong doesn't look like such a safe haven anymore. Observers pointing out that there hasn't yet been massive capital flight from Hong Kong are missing the point. It's early yet. And in the future, when ultra-high net worth individuals are choosing between Hong Kong and Singapore banks, Singapore will have the advantage of political stability and permanent rule of law, not a system that could change in 2047, or earlier.

In an October report, The Financial Times quoted a source at a Singaporean bank active in Hong Kong who said that an unprecedented number of accounts had been opened in the bank's Singapore branches in the past three months, most ranging from S$1million to S$2 million (US$730,000-$1.4 million).

More in this category: « Indonesia's P2P market is booming Philippines at risk of returning to money laundering blacklist »
back to top