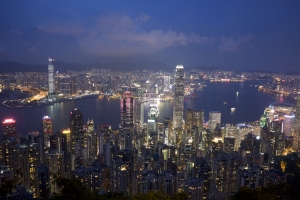 At HSBC, 94% of retail transactions were conducted digitally in March while active users of its mobile app surged nearly 40% year-on-year to 1.12 million, according to Bloomberg. Meanwhile, Citigroup's digital wealth transactions increased 37% on an annual basis in January and February.

In a June report, S&P Global Ratings described Hong Kong's retail banks as "pioneering the city's fintech development." That might be overstating the case. After all, had the incumbents been fintech trailblazers, the Hong Kong Monetary Authority may have been less inclined to issue eight virtual banking licenses to consortia that include many non-traditional financial firms.

"In our view, VBs are more likely to be niche players whose focus will be promoting financial inclusion rather than becoming direct challengers to the existing banks," S&P wrote. That depends how we define "financial inclusion." 95% of Hong Kong's adult population has a bank account, one of the highest rates in the world. If financial inclusion means having access to useful and affordable financial products and services, then Hong Kong is pretty inclusive.

There are exceptions, however. Hong Kong banks are known for charging customers fairly high fees. With their low overhead, virtual banks have room to charge much lower fees, or even waive them altogether - at least at the beginning. The digital newcomers have an opportunity to capture business from customers who want banking to cost them less.

Hong Kong's incumbent banks are well aware of this dynamic, and are moving to make their services more cost competitive. In June 2019, HSBC in June said it would go back to providing free basic banking services to 3 million of its retail customers and scrap the counter transaction fees it charges to small depositors. HSBC's customers will not miss the HK$50 monthly fee charged from 2001-19 if their balances fell below HK$5000.

While reducing profits temporarily, scrapping unpopular fees is a good way for traditional banks to fend off the challenge from digital upstarts. Incumbents already have the trust of their customers - and virtual banks cannot easily chip away at that - but they should not take that for granted. They should focus on developing a more customer-centric experience.

Virtual banks, meanwhile, need to find their value proposition. Digital agility is part of the package, but insufficient by itself. Hong Kong's large incumbent banks all offer mobile banking apps that allow customers to handle most everyday banking from the convenience of their smartphones. As S&P points out in its recent report, HSBC's payment app, PayMe registered more than 1 million users in less than 18 months after its Feb. 2017 launch.

More in this category: « Can South Korea's K bank stage a comeback? Singapore's digital banking race accelerates »
back to top