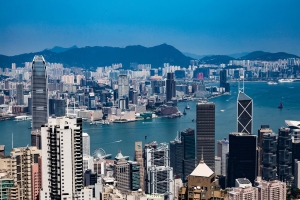 Neobanks like to talk about disruption, but in Hong Kong, they're actually putting their money where their mouth is. Five of the eight virtual banks approved to operate in the former British colony have gone live: ZA Bank, Airstar, WeLab, Fusion Bank and Livi Bank. While none of them has a game-changing value proposition yet, their low fees, digital agility and high deposit rates (at least during a promotional period) are bound to attract customer interest. Their digital acumen is taking on new importance during the pandemic, which recently flared up in Hong Kong.

Unlike their counterparts in Singapore, where the launch of digital banks has been delayed until mid-2021, Hong Kong's incumbent banks must deal with the challengers now. As if they didn't already have enough to worry about. According to the Hong Kong Monetary Authority, Hong Kong retail banks' profits fell 7.7% annually in the first quarter while asset quality deteriorated and loan provisions increased.

HSBC has been having an especially tough time. Its profits fell 67% year-on-year in the second quarter while its shares recently sank to a 25-year low amid money-laundering allegations. Hong Kong's largest bank plans to cut 35,000 jobs as part of a restructuring plan that will see it further pivot to Asia from Europe.

To fend off virtual banks in Hong Kong, HSBC plans from November to eliminate fees on 26 general banking and transaction services for 4 million account holders in the city. HSBC said in a statement that it hoped jettisoning the fees would "help customers who have been hit hard by Covid-19’s economic fallout.” That move follows its decision last year to waive minimum balance fees.

Unlike Standard Chartered, which is backing the virtual bank Mox, HSBC has not invested in any of the digital newcomers. While it is unlikely many HSBC customers will hastily move their money into an unfamiliar digital bank, in the long run HSBC will face much stronger competition in Hong Kong's retail banking sector.

In August, virtual bank WeLab - the only homegrown neobank in Hong Kong - said that it had added 10,000 accounts within ten days of its launch. 60% of WeLab's customers are using two or more of its products, the bank said in a statement, adding that its GoSave time deposit account is particularly popular.

The fact that the first 10,000 customers to open a WeLab account were offered a three-month 4.5% promotional interest rate on their deposits of up to HK$50,000 probably helped WeLab add those new accounts expeditiously.

Looking ahead, the key for WeLab and Hong Kong's other virtual banks is to find more compelling value propositions to attract customers besides subsidies.

More in this category: « Is Grab's digital banking bet on the money? Southeast Asia of growing importance for Tencent's global fintech push »
back to top