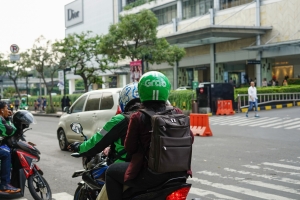 MUFG invested a whopping US$706 million into Grab, making the Japanese lender the largest investor by far in the funding round. However, as Fitch Ratings notes, that amount is just 1% of the Japanese bank's equity. The investment in an unproven digital banking model is a risk MUFG can afford to take.

For MUFG, Grab's strong presence across Southeast Asia's key markets - Singapore, Malaysia, Vietnam, Thailand, Indonesia and the Philippines - could give the Japanese a lender new regional expansion opportunities. MUFG aims to leverage Grab's IT prowess, brand recognition and large user base to sell financial services across Asean, Fitch says, in particular through "partner banks" in Thailand, Indonesia, the Philippines and Vietnam.

“MUFG’s investment into Grab is a vote of confidence in our super app strategy and our ability to build a long-term, sustainable business,” Ming Maa, Grab’s president, said in a statement.

Added MUFG’s deputy president and incoming CEO Hironori Kamezawa CEO: “We believe that this alliance will also generate additional momentum for our ongoing digital transformation of MUFG,” he said.

Southeast Asia looks more promising for MUFG than its home market of Japan, which is almost certainly headed for recession. Even in a better economic climate, the Japanese banking sector remains mature and highly competitive. Banking digitization in Japan is moving fairly slow as well. While many fintech services are available in Japan, Japanese regulators have not prioritized the development of digital banks. That makes Japan an outlier in East Asia's developed economies: Hong Kong, Taiwan and South Korea have all issued multiple digital banking licenses while Singapore plans to do so by 2021.

More in this category: « How will Covid-19 affect virtual banks? P2P lending in South Korea faces rising backlash »
back to top
© 2007 - 2021 Kapronasia