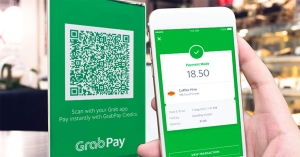 Grab is going all in on digital banking. In the period of less than a month, Southeast Asia's most valuable unicorn has won a Singapore digital bank license and raised US$300 million in a funding round led by South Korea's Hanhwa Asset Management. That was the first external funding for its fintech arm. Other participating investors included long-time Grab backers GGV Capital and K3 Ventures as well as eBay founder Pierre Omidyar's Flourish Ventures.

Grab has sold investors on the idea that it can morph from a Uber lookalike into a WeChat equivalent or failing that, a super financial services app. To justify its inflated valuation (currently US$14.5 billion) and blaze a trail to profitability, Grab needs more than ride hailing, food delivery and an e-wallet. It needs high-margin digital financial services.

In a January 14 press release, Grab said that its financial services unit is growing briskly, although it appears to still be unprofitable. Total revenue for the unit rose 40% in 2020. Grab has also distributed more than 70 million insurance policies since launching its insurance products in April 2020.

Working in Grab's favor are a strong market presence in Southeast Asia (Singapore, Malaysia, Indonesia, Thailand, the Philippines and Vietnam), the tie-up with Singtel in Singapore and the deep pockets of its backers. Grab is among the best funded of any fintech unicorn.

At the same time, the Singaporean company excels at embracing the right industry trends at the right time, first with the addition of food-delivery services, then with the launch of a fintech arm, and now by expanding into certain ascendant fintech segments. In December, Grab rolled out its own buy, now pay later (BNPL) service, aptly named PayLater. Given its large user base, many without credit cards, this one could be a big winner for Grab.

Less impressive is Grab's ecosystem based on ride-hailing and food delivery. Pundits wax lyrical about the treasure troves of data contained therein. But how much value do data about rides and food delivery have for retail banking? By this logic, if Grab knows that a user travels regularly to a certain department store or orders Laksa three times a week from the same restaurant, then it can better tailor digibanking products for the person. We are not so sure.

On the merchant side, there is potential to provide lending services to drivers, hawkers, restaurants and other small businesses that use the Grab platform. But remember that Grab is going for scale: That is why it bid for the digital full bank (DFB) license instead of the digital wholesale bank (DWB) variant, valid only for non-retail banking.

Grab's strongest challenger among platform companies is NYSE-listed Sea Group, Singapore's most valuable public company. Tencent-backed Sea has a digital services ecosystem of gaming, e-commerce and digibanking that neither Grab nor Gojek can match.

Sea recently purchased Indonesia’s PT Bank Kesejahteraan Ekonomi (Bank BKE) for an undisclosed amount, according to Bloomberg. That move should allow Sea to provide deposit-taking and lending services in Southeast Asia's largest economy without applying for a banking license of its own.

More in this category: « Malaysia moves ahead on digital banks Sea doesn't need to be a super app to thrive »
back to top