Fintechs could give Vietnam's banks a run for their money 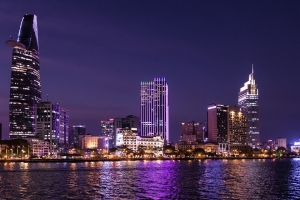 Vietnam is one of Southeast Asia's most dynamic markets for fintech. It has a young, connected population, a fast-growing economy and millions of unbanked people. In 2017, just 40% of Vietnam's adults (defined as 15 years or older) had a bank account, according to the World Bank. Investment in Vietnam's fintech startups reached $117 million in 2018, according to startup accelerator program Topica Founder Institute.

The digital payments segment is growing steadily in Vietnam. Transactions reached VND 53.1 trillion in 2017, up 64% from a year earlier, according to the State Bank of Vietnam (SBV). 20 of Vietnam's 27 licensed payment services offer digital wallets. According to Statista, Vietnam's digital payments' transaction value will reach almost US$8.1 billion in 2020. With compound annual growth rate of 16.4%, the value will rise to approximately US$14.9 billion by 2024.

Like many banks in the region, Vietnamese banks have been cautious about adopting full-throated digitalization. Analysts say that Vietnam's banks have focused primarily on boosting their existing web-based and mobile banking platforms. Clunky legacy IT systems remain an ongoing problem - and that's where partnering with fintechs would be sensible, and indeed, more feasible than the banks constructing state-of-the-art digital platforms independently.

Some Vietnamese banks have moved to capitalize on financial digitalization. One of the major success stories is the partnership between VPBank and the Vietnamese asset management company VinaCapital, which created Timo, Vietnam's first virtual bank. Thanks to the involvement of VPBank, Timo was able to get a banking license. VP Bank also handles KYC, is responsible for any losses incurred by overdrafts, and shares revenue with Timo. The virtual bank offers VPBank a way to access a younger customer demographic than that of its traditional business.

The partnership with VPBank allowed Timo to keep overhead low and distinguish itself in a market where traditional banks have hundreds of retail branches. Timo executives say that their young customers don't want to wait in long lines at bank branches. Instead, they can engage with Timo staff members at "hangouts" - banking centers that double as coffee shops.

Timo also differentiates itself from traditional banks with its heavy focus on mobile banking. Customers can use the company's mobile app to transfer money and pay bills. Further, there is no minimum requirement to open CASA (current account, savings account) accounts.

In September 2018, VPBank launched another virtual bank called YOLO, which it described as "digital banking for the youth" in a statement. YOLO will provide customers with a suite of financial services and other services catering to daily needs, including transportation, travel, entertainment and restaurant reservations. The YOLO launch "reaffirms VPBank’s ambition to be the leader [among Vietnam's banks] in acquiring modern technology and developing digital platforms," the statement said. Other banks in the Vietnam market are following VPBank's lead in the fintech space.

In October 2018, the SBV approved VIB, HDBank, ACB, and PVComBank to operate e-wallets. At the same time, Standard Chartered is partnering with local fintech startup MoMO, in which it is an investor. Under the agreement, corporate clients can pay directly into their beneficiaries' MoMO mobile wallet.

More in this category: « UnionPay steps up European expansion Malaysia expected to launch virtual banks by 2020 »
back to top
© 2007 - 2021 Kapronasia