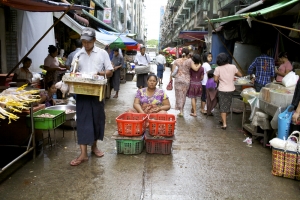 Myanmar is an intriguing market for fintechs. It is one of the fastest growing of all Asian economies. Annual GDP growth has exceeded 6% in recent years. The government has embraced digitalization and to a certain degree, foreign investment, a remarkable turnaround for a country that had been closed to the world for decades.

Yet Myanmar also remains impoverished: Nearly 1/3 of the population lives below the poverty line, according to the Asian Development Bank. Myanmar is the poorest country in Southeast Asia and the sixth poorest on the Asian continent with a GDP per capita of $6285, just ahead of Tajikistan and Kyrgyzstan, according to the International Monetary Fund.

The government aims to use mobile internet technology to bring financial services to low-income individuals and SMEs. At the same time, it is working to boost financial literacy and consumer protection. As part of the plan, the Central Bank of Myanmar created the Financial Regulatory Department (FRD), a digital services working group.

In December 2018, Myanmar B2B digital payments provider Ongo and mobile data operator Amanda announced a tie-up. Under the agreement, customers can top up their internet accounts at Ongo agent stores across the country and via the Ongo and My Ananda apps, as well as purchase Ananda products at Ongo agent shops.

Wave Money, Myanmar's top mobile financial service provider, reported strong growth for the whole of 2018 in a March press release. The company handled more than 2 trillion Myanmar kyat (US$1.3 billion) in remittance volume, which is equal to about 2% of Myanmar's GDP. Users sent and received funds from Wave shops and via its mobile wallets.

A key growth driver for Wave Money was its new mobile wallet app WavePay, which includes the option to send money and pay merchants by QR code. The most common use case for the QR feature is payment of taxi fare, the company says.

Wave Money remains bullish on the Myanmar market, CEO Brad Jones said in the press release. "As happy as we are with these results, we are not resting on our laurels and our 2019 strategy aims to surpass last year's results for even greater growth and increased positive impact for the people of Myanmar," he said.

More in this category: « South Korea ramps up fintech development STOs coming soon to Taiwan »
back to top
© 2007 - 2021 Kapronasia