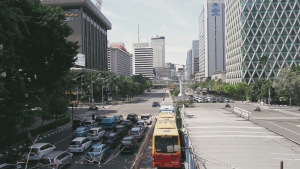 As one of Southeast Asia's preeminent markets, Indonesia offers strong opportunities for fintechs. With a population of 265 million, it is larger than Vietnam, Thailand, Malaysia, Myanmar and Cambodia combined. In 2018, the Indonesian economy expanded 5.18%, beating economists' forecasts.

At the same time, Indonesia has a huge underbanked population, estimated at about 95 million people. Even if they don't have bank accounts, they do usually have mobile phones with an internet connection, which means they can access many services offered by fintechs. Research by the Association for Internet Service Providers in Indonesia (APJII), shows that urban Indonesia has a 72% internet penetration rate. That figure falls to just fewer than 50% in rural-urban and rural areas.

One of the main reasons Indonesia has a large underbanked population is that the country is the world's largest archipelago, Piotr Jakubowski, an executive at Indonesian ride-hailing giant Go-Jek, told Inc42 in an interview. "The size and the nature of the country simply do not allow traditional financial systems to scale and cover everything," he said. Indeed, Indonesia has just 10 bank branches per 1,000 square kilometers.

Under this scenario, fintech firms are fast gaining a foothold in Indonesia. Analysts say that the digital wallets and peer-to-peer lending segments offer the best opportunities. P2P microfinancing, which offers more relaxed requirements and lower interest rates than traditional banks, is a no-brainer for Indonesia's credit-strapped SMEs, which are hard pressed to get bank loans despite their paramount role in the Indonesian economy: They account for almost all of the country's 58 million business units and are responsible for 58% its GDP, according to data compiled by Bank Indonesia.

Brink Asia notes that P2P lenders use proprietary algorithms that analyze a large pool of data as they assess potential borrowers' credit levels. Their technology is accurate enough to allow them to provided unsecured lending to family-owned SMEs, traditionally one of the most underbanked Indonesian market segments. Compared to banks, P2P lenders provide a wider variety of loan amounts and durations, including many small loans. Further, because some of the credit evaluation period is automated, the microfinancing platforms can process applications much faster than banks.

With that in mind, P2P lending is growing expeditiously in Indonesia. Citing data from Indonesia's Financial Services Authority (OJK), Fitch Ratings estimates that IDR22.6 trillion in P2P loans were doled out at the end of 2018, compared to IDR3 trillion in January 2018. Borrower accounts grew from just 3,500 in early 2018 to 4,360,000 by December.

Regulation of Indonesia's P2P lending sector, meanwhile, remains relatively lax. A lending firm must have at least IDR1 billion in paid-up capital when it applies for a license and IDR 2.5 billion when the license is approved. P2P firms can lend a maximum of IDR 2 billion to an individual borrower.

Still, Indonesian regulators are mindful of irregularities in the market and are cracking down on unlicensed P2P lenders. Hundreds of related websites and mobile apps have been taken down or disabled over the past three years.

Some analysts urge Indonesian regulators to keep a close eye on fintechs' monetization of user data. In order to calculate a person or company's credit worthiness, the fintechs typically collect data about demographics by doing behavioral profiling and running psychometrics tests. There are legitimate privacy concerns around this practice.

More in this category: « Thailand moves towards regulating ICOs UnionPay steps up European expansion »
back to top