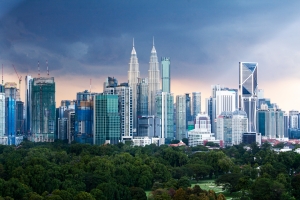 The Malaysian banks and Standard Chartered are shifting gears because they can likely launch their own variation of a digital bank with their existing banking licenses. That approach would probably be more efficient than going through the long process to set up a digital bank under Bank Negara's guidelines. Kelvin Lee, financial services assurance partner at PwC Malaysia, told The Edge Malaysia that the banks may "feel that the Bank Negara guidelines didn’t give them regulatory arbitrage."

Under Malaysia's regulatory framework for digital banks, the licenses will allow the holders to conduct either conventional or Islamic banking business in Malaysia. Capital requirements are fairly stringent, with an absolute minimum of RM 100 million (US$23.7 million) necessary during a three to five year foundational phase and thereafter RM 300 million.

The factors driving the rise of digital banking in neighboring markets don't necessarily apply in Malaysia. About 92% of Malaysians have a bank account; credit-card penetration is relatively high, and the country is not a regional hub for financial services like Singapore.

However, pandemic-induced disruptions have likely shaken incumbents out of complacency. During a lockdown that lasted nearly three months - March 18 to June 10 - Malaysian banks struggled. They couldn't add new customers as people were not permitted to visit bank branches. Sellers of loans and credit cards were not permitted to do in-person sales visits. Had they been more digitally adroit, they could have weathered the lockdown better.

Meanwhile, would-be digital bank applicants are moving to strengthen their positions. In April, Sunway took a 51% stake in Credit Bureau Malaysia, its first foray into fintech and a move that could support its bid for a digital bank license. Sunway plans to offer digital financial services to SMEs.

In June, Green Packet said it would acquire Singapore-based e-KYC firm Xendity for US$10 million. Xendity is a partner of Malaysia's Credit Reporting Agency.

Also in June, OCBC's insurance arm Great Eastern made the largest ever investment in Malaysia fintech, paying US$70 million for a 22% stake in the Axiata Group's Boost. The investment will support the expansion of Axiata's digital financial in Malaysia, Indonesia and Bangladesh, company executives say.