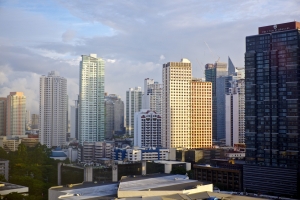 In April, China's Tencent, U.S. fund KKR and other investors pledged US$120 million for the Philippine mobile payment firm Voyager Innovations, which without additional funding only has enough cash on hand to last until mid-year. Voyager had been in talks with other investors prior to the announcement it had secured this funding, but those talks were delayed by valuation issues. The new financing dilutes the stake of Philippine telecom PLDT in Voyager to below 50%.

The $120 million capital injection will allow Voyager's digital wallet PayMaya to better compete with Alibaba-backed GCash amid rising demand for digital banking services. In late March, Bangko Sentral ng Pilipinas Governor Benjamin Diokno urged the public to use digital financial services when possible, including for purchasing daily essentials like food and medicine, transferring funds to family and friends, and paying utility bills. He sought to assuage fears about insufficient cash availability and prevent cash hoarding, while also reducing the potential for the virus to spread from face-to-face contact.

"There’s enough cash. There’s also a risk if you hold a lot of cash. I would suggest that to the extent they can use, if they can transact business electronically then that’s better than holding cash," Diokno told local media. To encourage faster adoption of online banking, the Philippine central bank is urging banks to suspend all related charges, he added.

Fintech firms often need to use subsidies to grow user numbers quickly, but in this case, they are getting a big helping hand from the Philippine central bank. Given the many low-income people in the Philippines who need access to the formal financial system, waiving any regular fees is likely to be a powerful draw for providers of digital banking services.

For Voyager, the name of the game remains financial inclusion. “In line with the country’s goals, we have made significant strides in spurring cashless adoption in a largely unbanked population,” Orlando Vea, the founder and CEO of Voyager, said in a statement. “This funding boosts PayMaya’s ability to reach more Filipinos, especially as access to digital financial services becomes even more important.”

More in this category: « Australia's neobanks grapple with impact of virus How are Xiaomi's digital banking prospects shaping up? »
back to top