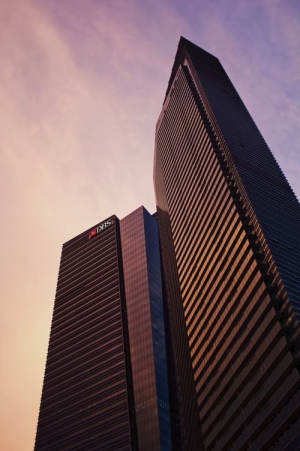 Among Asian banks, Singapore's DBS is among the most active in fintech. It has a partnership with Indonesian ride-hailing giant Go-Jek, a fintech accelerator in Hong Kong and a tech-driven Innovation Plan covering machine learning, cloud computing and API development. It has thus far created a platform of 155 APIs across roughly 20 categories. Given that DBS is well ahead of the curve when it comes to financial technology development, should it be concerned about Citibank's recent deals in its neighborhood?

Some analysts think so. "It isn’t so much that DBS is slackening but that far bigger competitors are moving onto its turf," Bloomberg wrote in an Oct. 4 commentary. Bloomberg notes that Citibank recently inked a partnership with e-commerce giant Lazada to issue a co-branded credit card in Southeast Asia. Citi and Lazada are aiming to sign up 500,000 customers region-wide over the next few years.

Citi is also teaming up with Singapore-based ride-hailing giant Grab. In June, Citi announced it would launch a co-branded credit card with Grab across Southeast Asia. The first market for the card will be Philippines, followed by Thailand.

"This will bring us one step further in realizing our vision of becoming the leading everyday super app in SEA,” Huey Tyng Ooi, managing director of GrabPay Singapore, Malaysia and the Philippines, said in a statement.

It's important to qualify the term "Southeast Asia" because it is not one market under the auspices of a national financial regulator. That makes it very different from China or India. What works in Indonesia may not work in Vietnam or Myanmar. Each regulator has a different agenda.

The partnership between Lazada and Citi, which Bloomberg highlights, is far from a guaranteed success. Alibaba's takeover of Lazada has not been especially smooth. Singapore-based Shopee recently surpassed Lazada in terms of active monthly users across the major Asean economies, according to the research firm App Annie. In the crucial Indonesia market, Lazada is a distant fourth.

For its part, DBS has a partnership with Go-Jek that allows users of the ride-hailing company's services in Singapore to pay for transactions with DBS's mobile wallet PayLah. According to DBS, PayLah is the top mobile wallet in Singapore by users (about 1 million). 80,000 merchants in the city-state accept PayLah.

Farther afield, DBS is targeting expansion in the largest markets in South and Southeast Asia: India and Indonesia. In March, DBS set up a wholly-owned subsidiary in India, DBIL. In a statement, DBS said that DBIL plans to establish more than 100 "customer touchpoints" – a combination of branches and kiosks – across 25 cities over the next 12-18 months.

"As an Asian bank, it is imperative that we take a long-term view of the region," Piyush Gupta, DBS group CEO, said in a statement.

More in this category: « Hong Kongers keeping open mind about open banking Fintech in Taiwan: steady as she goes »
back to top