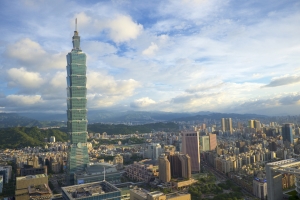 To be sure, Taiwan has some fundamentals required of a financial center: the rule of law, good governance and liquid capital markets. Taiwan has 1,717 publicly traded companies with a total market capitalization of NT$39.8 trillion (US$1.35 trillion), up 331% since 2000, according to data compiled by Taiwan's government. Foreign investors hold 41% of Taiwanese equities.

In late July, Taiwan shares hit a 30-year high, buoyed by the strong performance of Taiwan Semiconductor Manufacturing Co. (TSMC), the world's largest contract chipmaker and the most heavily weighted stock on the local index. Investors are bullish on TSMC as the company expects sales to rise 20% annually this year.

Taiwan's government wants to attract foreign banks to set up offshore units, which it says will help provide capital to support the manufacturing sector, the backbone of the economy, and establish Taiwan as a regional wealth management center.

That will be a challenge. Compared to Hong Kong and Singapore, Taiwan has stricter regulations on foreign currency exchange, while its workforce has a relatively low level of English proficiency. It also has a strict anti-money laundering regime that can make opening even a simple retail banking account tedious for foreigners. Regulators will need to find a way to streamline the process without compromising compliance if they expect to develop Taiwan as a private banking hub.

In Dec. 2019, Taiwan's Financial Supervisory Commission (FSC) announced the "New Wealth Management Scheme," intended to boost Taiwan's competitiveness as a wealth management center. The initiative focuses on creating new financial products and services for wealthy investors and giving financial institutions more room to engage in different types of business. Some of the deregulation measures must be approved by Taiwan's parliament, the Legislative Yuan.

While this initiative is a welcome development for the financial sector, it focuses on the domestic market and will not serve to make Taiwan a more attractive regional wealth management hub. The FSC expects 18 banks, all domestic, to qualify for it. The target customers are Taiwanese businesspeople with overseas operations. The Taiwan government would prefer that they stash their wealth onshore rather than offshore.

In a July editorial, The Taipei Times opined that "the mindset of Taiwan’s financial authorities is mainly to prevent fraud and curb money laundering, resulting in insufficient financial innovation."

That hits the nail on the head, and is one of the key reasons why Taiwan has not become a stronger regional fintech hub. Although Taiwan has a fintech regulatory sandbox, has introduced regulations for security token offerings and issued three virtual bank licenses, its fintech sector is tiny compared to Singapore or Hong Kong's. That's ironic, given that Taiwan has a strong technology sector and is awash in idle capital.

Perhaps the arrival of virtual banks will help spur a digital finance evolution in Taiwan. The three banks are set to launch before year-end. They include Line Financial's Line Bank, Chunghwa Telecom's Next Bank and Rakuten's Rakuten Bank.