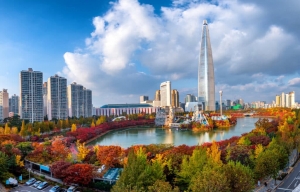 It is a testament to the difficulty of establishing a viable international financial center in Asia that so many first-tier cities in the region are vying to compete with Hong Kong yet none is truly a peer competitor. Even Singapore, undoubtedly the most important fintech hub in Southeast Asia if not the entire region, cannot match Hong Kong in the capital markets space. Seoul is the latest Asian city to throw its hat in the ring to become a global financial center.

Seoul is an intriguing choice for an international financial center. Though the mercurial North Korea is right next door, South Korea enjoys high political stability, scores reasonably well in rule of law indices, is well connected to the international financial system, and has a high standard of living. As long as they do not mind a chilly winter, bankers can live as comfortably in Seoul as in Hong Kong or Singapore.

South Korea is also a major trading nation and world’s 10th largest economy in terms of nominal GDP. From a pure economic standpoint, South Korea is much larger than Singapore or Hong Kong, whose GDPs are 38th and 35th respectively.

“Seoul is a few steps behind Singapore and Tokyo timewise, but our capital can provide financial institutions and investors with the best environment for the state-of-the-art technological development. It has the full potential to become Asia’s next financial center, Hwang Bo-youn, Seoul’s deputy mayor for economic policy, told The Korea Herald in April.

Hwang may be feeling bullish on Seoul’s prospects as an international financial center after seeing that the city ranked No. 12 – a record high – in this year’s Global Financial Centers Index, which is calculated with input from the World Bank, Economist Intelligence Unit, the OECD and UN.

That said, being a heavyweight economy does not necessarily equate to being an international financial center. Hong Kong and Singapore have unique advantages as financial hubs. It is hard for most countries to compete with their low taxes, whether corporate or on individual earners. The low tax rates are a result of deliberate policy decisions to foster the financial sector, and not every government is willing to make that trade-off.

Currently, Seoul can only offer very limited tax benefits due to Korean law. The benefits are restricted to providing discounted office spaces to international firms seeking to enter Korea. Over a five-year period, 70% of rent and maintenance fees for qualifying businesses at the International Finance Centre located in Yeouido, the nation’s financial hub, are subsidized. While this is a nice perk, it is not a game changer for a firm established elsewhere. For Seoul to become more competitive with Hong Kong and Singapore, South Korea would need to revise the Restriction Of Special Taxation Act, which prevents Seoul from offering tax benefits to businesses in an effort to balance the capital’s power with other parts of the country.

Further, as FT noted, South Korea’s bans on short selling and regulatory crackdowns on market makers, as well a prohibition on offshore trading of the Korean won, are stymieing South Korea’s efforts to be recognized by the index-maker MSCI as a developed market.

To be a serious contender as an international financial center, Seoul will have to address unpopular regulatory policies and find a way to make taxes more competitive with Hong Kong and Singapore. Otherwise, the city is unlikely to realize its aspiration.