Beijing is serious about promoting Macau as a financial hub 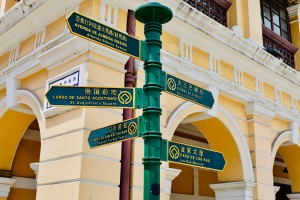 The former Portuguese colony of Macau, China's answer to Las Vegas, has long struggled to diversify its economy away from gaming. Efforts to promote MICE and family tourism have had limited success. After all, Macau is small and faces stiff competition in the region.

Yet, amidst relentless political turmoil in Hong Kong - China's only global financial center - Beijing has found a new opportunity for Macau: offshore finance. While Macau cannot replace Hong Kong, it might be transformed into a secondary offshore financial center for China. Macau benefits from the same one country, two systems model that governs Hong Kong, although the former's legal system is Portuguese rather than British, and doesn't enjoy the same prestige.

During a December visit to Macau marking the territory's 20-year handover to China, Chinese President Xi Jinping praised Macau's development over the past two decades and signaled the central government's support for further diversification of the city's economy.

“Macau’s successful experience speaks volumes about the viability and strength of one country, two systems, as long as we are committed to it and act on it,” Xi said.

Following Xi's speech, China’s banking and insurance regulator announced a series of policies to deepen financial ties between Macau and the mainland. In a statement, the regulator said that Macau banks are encouraged to expand to the mainland, mainland financial firms would be supported in their expansion to Macau and that mainland insurance capital will be allowed to invest in Macau.

Further, the Chinese-language Securities Times reported that the Guangdong provincial government had been working closely with Macau authorities to speed up the process to establish a stock exchange. There are considerable hurdles to achieving that goal. As The South China Morning Post noted in December, Macau's money supply is modest. Its deposits total just $81 billion, compared to $1.8 trillion in Hong Kong. Macau also doesn't have a significant amount of renminbi circulating in its banking system - just 7% of the US$91 billion in yuan held in Hong Kong.

At the same time, the trading of renminbi-denominated equity products in Hong Kong "is still not as good as had been expected," noted Ken Chu, group chairman of Mission Hills Group, in a recent SCMP commentary. "Therefore, one wonders whether a renminbi-denominated securities market in Macau could ever take off," he added.

Hill brings up a good point: Investors might not be especially excited about a yuan-denominated stock exchange in Macau. That's not to say the city cannot develop a larger financial services sector, but the idea that doing so would in some way threaten Hong Kong's status isn't credible. Macau simply lacks the size, financial infrastructure and financial industry talent to challenge its neighbor as a global financial hub or as a primary offshore renminbi financing center. Singapore is a more credible challenger in both areas.

However, with a larger financial sector, Macau could capture some Greater Bay Area financial-services business that likely would have flowed to Hong Kong had the territory developed more in line with Beijing's vision for it under one country, two systems. Since the Greater Bay Area remains more a concept than a reality at this point, it's hard to calculate how much business is involved. But Beijing clearly wants to reward Macau for what it sees as "the correct development path." Developing a financial-services sector in the former Portuguese colony is one way to do that.

More in this category: « Why are Grab and Singtel applying for a Singapore digital banking license together? Vietnam pushes for a fintech regulatory sandbox »
back to top