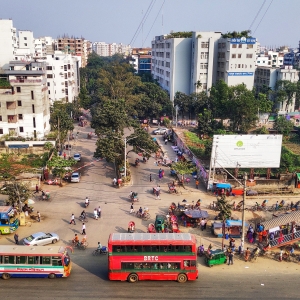 Formerly one of Asia's poorest countries, Bangladesh has made remarkable economic progress in recent years. Today, it has a higher GDP per capita than its neighbor Pakistan as well as Cambodia and Myanmar. This year, it is likely to be Asia's fastest growing economy: The Asian Development Bank forecasts annual GDP growth to reach 8%, while the World Bank expects growth of 7.3%.

Yet the development of Bangladesh's financial sector has not kept pace with that of the overall economy. Among the country's 163 million people, 75% (122 million) are unbanked. Smartphone penetration, meanwhile, is forecast to reach 75% by 2021, while the population is young and open to mobile banking. Cash still accounts for 94% of transactions, according to the United Nations, while no credit or debit card companies have established a significant presence. Therein lies a strong opportunity for fintechs.

Thus far, the fintech segment in Bangladesh is focused on payments and clearing systems. Incumbents play a major role in the market, although there are an increasing number of startups. There are four main digital finance platforms which allow banks to do online banking as well as operate physical ATMs: Bangladesh Automated Cheque Processing Systems (BACPS), the Bangladesh Electronic Funds Transfer Network (BEFTN), the Real Time Gross Settlement (RTGS) and the National Payment Switch Bangladesh (NPSB).

Foreign investors are taking an increasing interest in the Bangladesh fintech market. In April 2018, Ant Financial and Bangladesh's top digital wallet startup kBash - which has 30 million users and 180,000 affiliated retail partners - announced they would work together to build a local version of Alipay. The two companies did not disclose terms of the deal but Bangladeshi media reported that Ant would take a 20% stake in bKash.

"As part of Ant Financial's global strategy, we are keen to share our technology know-how with partners like bKash," Eric Jing, chairman and chief executive officer of Ant, said in a statement published on bKash's website. "We are confident that we can bring highly secure and inclusive financial services to address the needs of local people and small business here."

"This investment opens many new opportunities for bKash and demonstrates the confidence a world-class player is placing in Bangladesh,” Kamal Quadir, chief executive officer of bKash, said in the statement.

Meanwhile, Korea's Woori Bank, which has been present in Bangladesh since 1996, announced in February that it would cooperate with the Bangladeshi financial product recommendation site Bankcomparebd to sell retail loan products and engage in digital marketing services. Woori Bank is also working with bKash on cross-border remittances.

More in this category: « Will Indonesian banks be able to challenge super apps in fintech? Should Australia's banks fear fintechs? »
back to top