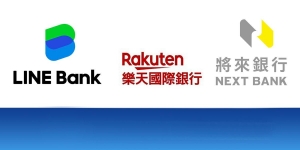 We wish we can say we are surprised but we are not: Taiwan’s digital banks are failing to disrupt the country’s financial services sector. While showing potential to exist as digital financial services platforms in a way incumbent Taiwanese lenders do not, Line Bank, Rakuten Bank and Next Bank nonetheless have a long road ahead to reach profitability, with only lending offering money-making (rather than losing) possibility in the short term. For at least the next few years, the digital lenders will struggle to break even on deposits and payments, while they are for the time being restricted from potentially more lucrative businesses like wealth management.

Taiwan’s regulators have deliberately limited the chance for online banks to disrupt incumbents. Taiwan is, after all, overbanked It has 38 commercial banks with 3,404 branches for a population of roughly 23 million. Just a few of these lenders have an overseas presence. The rest of them are focused entirely on the domestic market, with limited chance to grow.

Though the Financial Supervisory Commission (FSC) has encouraged consolidation for years, incumbent banks generally prefer to maintain their low-growth existing businesses independently rather than join forces. The last blockbuster merger in the banking sector occurred in 2006 when the two financial units of Mega Holdings merged: International and Commercial Bank of China (ICBC) and Bank of Communications (the Taiwan-based entity). The fact that the two banks were both already in the Mega ecosystem made the merger easier than average.

Had the FSC wanted to encourage stronger competition between Taiwan’s digital banks and incumbents, it would have fast-tracked the online lenders’ path to obtaining the trust and investment advisory business licenses that allow banks to sell wealth management products. However, it did not, and there is no timeline for the process.

Similarly, online lenders are restricted from forex, which is a lucrative business for Taiwanese incumbent banks. To engage in that business, banks in Taiwan have to apply to the central bank through the FSC, and there is a long regulatory process to be completed.

Recent research by McKinsey found that demand for online banking is indeed growing in the aggregate in Taiwan, with digital accounts opened exceeding 10 million by the end of 2021. However, the survey includes accounts opened with digital units of large incumbent lenders as well as pure-play digital banks. In this case, Richart, a digital subsidiary of Taishin Bank, Cathay Pacific’s Koko and Bank SinoPac’s DAWHO have the most digital accounts. Line Bank is No. 4, and neither Rakuten Bank or Next Bank make it into the top 10.

Still, customer dissatisfaction with incumbents, who have been slow to adopt to the digital age, and whose legacy IT systems can be embarrassingly clunky, could offer long-term opportunities for Taiwan’s three pure-play digital banks.

With that in mind, Taipei Fubon Commercial Bank in May approved a plan to increase investment in Line Bank Taiwan by NT$2.195 billion (US$73.88 million), which is expected to raise its stake in the virtual bank from 25.1 percent to 27.18 percent, making Taipei Fubon would second-largest shareholder in Line Bank after Line Financial Taiwan Corp, which holds a 49.9 percent stake. Taipei Fubon’s decision came as Line Bank seeks to increase its paid-in capital by NT$7.5 billion after its accumulated pretax losses approached one-third of its paid-in capital of NT$10 billion.

More in this category: « Australia continues to struggle with money laundering Will Myanmar be placed on the FATF blacklist? »
back to top