Alipay and WeChat struggle to gain foothold in Indonesia 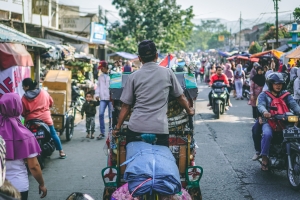 In less than a decade, Alibaba and Tencent have built the world's foremost mobile internet ecosystem in China. Their success derives from both innovative business models and unflappable determination. To be sure, they arrived at the right time - the rise of smartphones - but good timing isn't enough to prevail in a market as cutthroat as China's. Of course, Alibaba and Tencent also haven't had to contend with foreign competition. Would they have been as successful without the Great Firewall?

Perhaps, or perhaps not. But these companies have ambitions that are even bigger than China's market of 1.4 billion consumers. They want to be go-to digital financial-service providers across Southeast Asia. The large underbanked but tech-savvy population across Asean is steadily adopting mobile wallets, much as Chinese consumers have in the past five years.

With 250,000 consumers, Indonesia is Asean's largest market and a priority for China's tech giants. But the companies are finding Indonesian regulators have their own priorities. Indeed, they have advised Alipay and WeChat to cooperate with local banks to ensure their business is legal. Requiring foreign companies to work with local partners as a condition of market access has long been a major Chinese economic policy tool. The practice may be protectionist, but it can also be effective in cultivating local industry. With the success of China's model, its neighbors in Asean were bound to take note.

Further, Indonesia has not signaled a willingness to allow the Chinese firms to serve the Indonesian consumer market - only foreign tourists. The Jakarta Post reports that Chinese tourists are currently using the digital wallets illegally in Bali, which can't be endearing Alipay and WeChat to Indonesian regulators.

In February, five of Indonesia's largest SOEs (including BRI and BNI) announced that they would merge their mobile wallets to better compete with homegrown unicorn Go-Jek and Singapore's Ovo. Analysts doubt that this new alliance, which is called LinkAja, will offer superior services to Go-Jek and Ovo. However, that could change if Alipay and WeChat get involved.

Indonesian banks are interested in working with both Alipay and WeChat, even if it only involves Chinese tourist business. BCA has indicated it would like to cooperate with either of the Chinese firms beginning from this September.

BRI signed a memorandum of understanding (MoU) with Alipay in December 2018 to jointly launch a QR-enabled payment system through the Chinese firm's platform. "As China has its own payment system, we must be able to facilitate their [Chinese tourists'] needs. This move is aimed at supporting the country's tourism industry," Handayani, BRI's consumer director, was quoted as saying by The Jakarta Globe.

That deal is pending approval from Indonesian regulators.

More in this category: « Regulators signal cautious support for Vietnam's P2P lending industry With embrace of crypto, Japan reinvents itself again »
back to top